Congresswoman Myrick and the Angry Muslims

No doubt about it Sue Myrick has gotten a little over the top when she talks about Muslims and terrorists in the same sentence. But after witnessing last night's "Conversation With America" town hall meeting I wouldn't blame anyone from fearing some of these angry people. 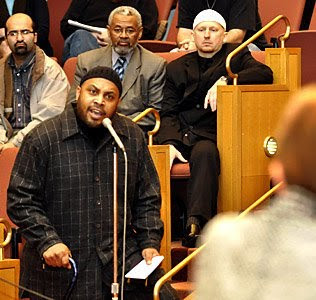 At one point during the meeting a speaker asked Myrick why Joseph Stack the IRS pilot isn't called a "Christian terrorist." Myrick didn't answer. But as far as Cedar Posts can tell he wasn't targeting Muslims while holding tightly to a Christian Bible.

Another speaker wanted to know why the meeting wasn't "held in a mosque or Islamic community center".

But things really out of hand when an Iranian-American announced that his homeland was "hijacked by radical Islamists in 1979", this set off a large group of Muslims in the crowd. Not until Myrick walked down and told the primary heckler to be quiet was the speaker able to speak again but his comment that "radicals were stoning, and hanging women in Afghanistan" brought the crowd and the heckler back to their feet.

While many of the speakers were courteous, all criticized Myrick for her views and most in a very angry tone.

You can find more about the meeting over at the Charlotte Observer here and by viewing WBT News Reporter Chris Miller's Twitter Page here. 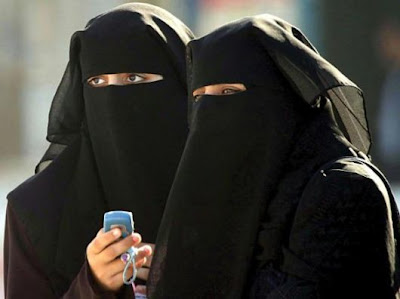 A few years ago I traveled to the Middleast and I was surprised at how Christians, Jews and Muslims seem to get along in harmony.

But sitting in a McDonald's in Qatar, I found a world turned upside down. The young man who sat at the table across from me was eating a Big Mac and Fries, wearing a New England Patriots Football Jersey, with Nike Air Jordans and Oakley Sunglasses yet he was glaring at me in anger, will I was hoping he didn't have a bomb. It's like wearing a "Burka" and having a "Twitter" account, if you don't want to be westernized then why to you want to wear Prada shoes under your Burka? And what is with all the anger? I just don't get all the anger.

But how do you feel about Sue Myrick's contention that there are Islamic Extremists living among us?
Posted by Cedar Posts at 9:48 AM

How do I feel? I feel like she's right. There are also militant "Minutemen", Klansmen, and other crazies among us. I'm a conservative dude, but don't read this as "PC" talk.

Never underestimate the ability of a zealot to wreak havoc & injury on their fellow humans, and there are a lot of zealots out there.

I applaud Ms. Myrick for standing up and saying what the vast majority of Americans are thinking (this is my guess). The extremists are NOT members of a peaceful sect. They are cowards who lack the fortitude and intelligence to deal with issues they disagree with. Many Muslims abhore these extremists, and I encourage them to eliminate those who would disparage their religious beliefs.

How do these people get in our country? I saw one at Harris Tetter wearing a burka and it really did make me uneasy. I'm sure look strange to Muslim women considering in the summer we.... well I'm nearly nakie most of the time in the summer.

I have to say I agree with Myrick, I think she has balls and I support what she is saying! IF YOU DON'T like it here LEAVE! The ocean is on 3 sides...need a raft or float we'll provide it!

But unfortuatnely what I see happening more and more is "just give us a couple of years and we will change for your benefit".... if gays say "this ad is unfair" then we remove the ad, if a different religion says "God" should not be on our money, we attempt to remove it! If you speak another language we will change ours! WHAT THE HELL! America was founded on God! Do you think another country will change THEIR belief's for an American! NO friggin WAY! (trying to keep it nice)

The America I live in NOW is NOTHING like it used to be and THAT makes me sad and angry!

America used to be homey, safe and comfortable! Now it seems to me it is becoming a third world country! That sucks!

Now, if you will excuse me while I go eat some apple pie n watch some baseball while I still can :-)

When I see people dressed like those two I automatically think "terrorist"! And on't blame me for their "image"...that is what they represent! Why else would you need to cover (hide)yourself? And don't tell me it is about their religion it is about their men's control not only over their women but over ALL they see! They don't see and buy they see and TAKE with bombs! But hey I say if you are a suicide bomber and need to blow something, I am at least thankful you take yourselves when ya go...idiots!

I agree with ThaQueenCity, I am a very conservative Christian, but I'm not one of those that believes it's my way or the highway. I feel that if you want to be Muslim, gay, athiest, Hispanic, or whatever large group is making news today, that's your right. I may not agree with it, but I'm not going to stand up in arms against you. However, I'm so sick of us bending over backwards to support them and change our ways to fit theirs. The majority culture of this country has worked just fine since 1775 and even before, so why now do we have to start making changes and wiping butts just to make the rest of the United States of the Offended happy. Just like the Prime Minister of Australia said (and I think he was addressing Muslims): theirs is a Christian nation, founded on Christian beliefs, those not in agreement with those beliefs are more than welcome to reside in Australia, but if they don't like the way the majority prefers things, then they can get our of their country and go home. I just don't think anything in this country bothers me more than our attempts to cater to Hispanics. They came here, let them adapt to our culture, not us to theirs.

I attended the forum.

I have two questions for those who are criticle of Rep Myrick:

(1) do you know of a majority Muslim country who would allow a forum to discuss the tenets of Christianity?

(2) do you know of a majority Muslim country who has a university with a Christianity Studies Department?

If the answers are no, does this not cause you concern?