Warren Cooksey says neighbors' concerns about a proposed public housing project in Ballantyne do not matter when it comes to voting for approval or denial of the Ballantyne Crossing project.

Cooksey represents the Balllantyne area on the Charlotte City Council and despite very strong and vocal opposition, he says his hands are tied on the vote. 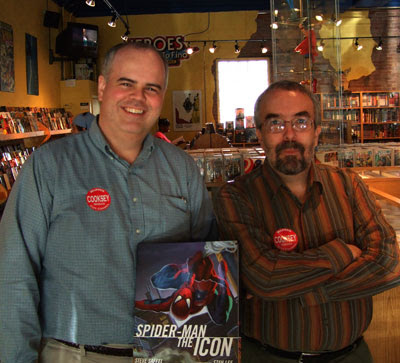 Warren Cooksey an avid Spider Man fan and the Owner of Heroes.

"We run the risk from either side, depending upon what the vote is of legal action, saying you didn't do this right," Cooksey told WCNC reporter Tony Burbeck in an interview that aired Wednesday night.

Cooksey also said "the evaluation whether it's an appropriate land use is the issue, not the impact on neighboring property values and not potential concerns about crime."

Cooksey continues in the WCNC interview:

What Cooksey is trying to say with a lot of double speak is "it's not my fault I don't have a backbone".

But let us recall Cooksey's campagin promise: "Given the importance of healthy neighborhoods to all our citizens, it is vital that city government’s efforts here are measurable, successful, and fiscally prudent".

There is hardly anything fiscally prudent to supporting the Housing Authority's dim idea of putting public housing on some of the most expenses real estate in Charlotte.

Let's get real here, this a request to change the zoning. A no vote makes sense and nothing else does, even more so with a law that some people including Cooksey are using to duck and cover behind.

Cooksey's argument might hold water if the request was to change from MF to R-12.

So why is Cooksey trying to pass blame back to Raleigh?

And when did section 8 or public housing change from "rent free" to "affordable"? With affordable one would assume that you pay for your housing.

Ballantyne has plenty of affordable housing, a very nice 3 bedroom duplex on Bevington Place rents for under $900.00 a month. One bedroom apartments in nearby Pineville rent for under $500.00 a month.

The bottom line the property is currently zoned commercial, that is how it should stay. If Mr. Cooksey votes in favor of the zoning petition he is not only a failure to the citizens of Charlotte but an embarrassment to common sense as well.
Posted by Cedar Posts at 6:59 PM

As I have stated elsewhere, I implore the citizens of Charlotte not to elect any incumbent for BOCC.