Last Sunday a Coast Guard helicopter crew rescued a man stranded on a sandbar at the north end of Kiawah Island.

The man had been hiking on the beach and became stranded on a sandbar after the rising tide cut him off from shore. The man then contacted the Coast Guard for assistance.

An Air Station Savannah, Ga., helicopter crew was diverted to the distress call. The aircrew then safely hoisted the man and took him to Coast Guard Air Facility Charleston, S.C., and released him without injuries.

Marine Corps Air Station Beaufort notified the Coast Guard at 5:17 p.m., Wednesday, reporting that two pilots aboard a Marine F/A-18D Hornet attached to Marine All Weather Fighter Attack Squadron 224 went down off the coast of South Carolina. In addition, it was reported that two parachutes were seen indicating that the pilots had ejected. 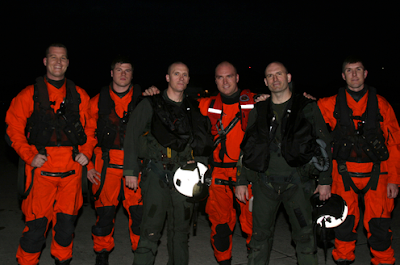 A Coast Guard HH-65 Dolphin helicopter rescue crew from Charleston located the missing pilots at 6:15 p.m. and returned them to MCAS Beaufort.

The Coast Guard was notified of a distress signal off the coast of Charleston Harbor at 4:06 p.m. via a Personal Position Indicating Radio Beacon or PPIRB. An HH-65 Dolphin rescue helicopter crew from Air Facility Charleston responded to the location of the distress signal and located 4 boaters aboard a 23-foot recreational boat taking on water. The 41-foot rescue boat crew from Station Charleston arrived on scene shortly thereafter and removed all 4 passengers at about 5:08 p.m. Sunday.

In addition, the rescue boat crew successfully located and patched the hole taking on water and placed the disabled boat in tow.
Posted by Cedar Posts at 8:22 AM

Brilliant Work,
I would have never heard about this...thank you.