Charlotte's WCNC News today announced that more than 4,300 votes were cast in the "Name the Newborn Eaglet" contest and Noah is the name of Savannah's eaglet with 52 percent of the vote. 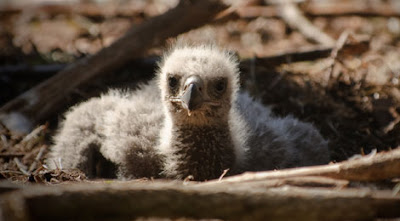 Cedar Posts encouraged readers to cast a vote in favor of naming the eagle in honor of Charlotte's Lance Corporal Noah M. Pier who died last month while serving overseas in Afghanistan.

Props to all who voted for the name Noah.

In a few weeks Noah the eaglet will be taken to a hack tower to learn how to survive in the wild.

The process of "hacking" involves introducing the eaglet to the wild. The eaglet will be placed in the tower and fed daily. It is hoped that the eagle will eventually fly from the tower and hunt its own food.

You can read more about Noah and the work of the Carolina Raptor Center here.

Over at the Charlotte Observer Stephen Corbert fans cried "fowl" suggesting that the voting was rigged and that Corbert should have won because they spent a half of a day voting for Corbert.

Cedar Posts recognizes the power of the Corbert Nation but if memory serves me correct Corbert had an Eaglet named after him in 2006. The bird was released into the wild and promptly flew to Canada.
Posted by Cedar Posts at 6:18 PM

Way to go Cedar! Great Idea! Thanks for being a force and pushing this idea through.

It will not ease his parents pain but I can think of no better tribute. Semper Fi!

Way to go Cedar! Great Idea! Thanks for being a force and pushing this idea through.

It will not ease his parents pain but I can think of no better tribute. Semper Fi!

I would have never known unless you had posted and then got all my friends to vote as well, Thanks Cedar Post!!!!!!!

At first I thought it was a dumb idea, and I doubted Noah's parents would approve. But much to my surprise everyone who knew Noah or his family got behind this. Thank You Mr. Cedar Posts whoever you are!

We are so glad you did this, Noah loved the outdoors and this country I know he is laughing at us for being so sentimental but it means a lot to us.

That is one ugly little bird.

Hey Cedar I just got this email:

Congratulations! Thanks to your suggestion (and 23 others), Noah will be the name of the new eaglet at Carolina Raptor Center. Since you chose the winning name, we would like to send you an exclusive bird naming certificate. Please respond to this email with your current mailing address and you will receive your certificate in the mail shortly!

How cool is that?