A Frog with a Martini or as I would prefer to think a Margarita! 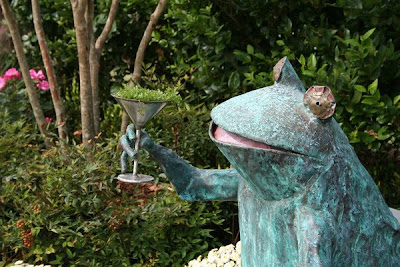 I don't really like frogs the one in the photo on the side bar belonged to my sister who before she became engaged bought frogs everywhere she went.

I think she believed that one day she would find a frog and he would become a handsome prince. This odd little bit of whimsy became a family joke, and over the years of her single hood she received dozens of frogs each year. Friends gave frogs for her birthday, siblings would see a frog and lay out sometimes a large chunk of change to buy a frog, a family trip always meant a frog or two in a suitcase on the way home.

So I'm haunted by frogs. We my sister became engaged she swore off frogs after all she found her prince, (if you ask me he's a toad but that is another story) anyways no one took the hint and the frogs kept coming. So whenever I see a frog I think of my baby sister.

The above frog is courtesy of Joan Perry. Joan has one of my all time favorite blogs. But it is not really a blog at all, it is more a photo essay about life in Charleston and the surrounding low country. Joan's Photo Blog is called Charleston Daily Photo and you can see everything Charleston right here. Trust me it is worth the visit because there is much more to Charleston than frogs.
Posted by Cedar Posts at 7:14 PM

Thank you Cedarposts! You are a regular read for me as well.