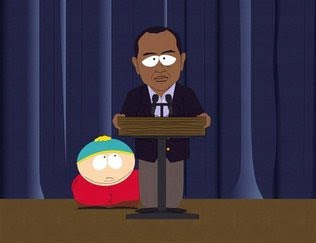 Eric Cartman, left, and an animated version of golfer Tiger Woods are shown in a scene from the 14th season premiere of the animated series, "South Park," airing Wednesday, March 17, at 10 p.m. on Comedy Central.

CNN is also reporting that Tiger will return to tournament golf at the Master's next month in Augusta. What a circus that will be.
Posted by Cedar Posts at 6:46 AM