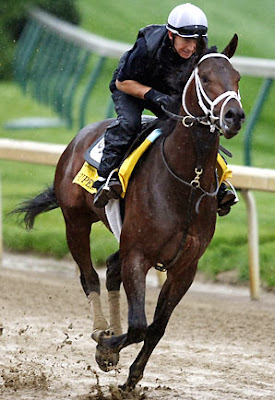 Super Saver is not a name that would normally strike you as a derby winner, but Super Saver slogged his way around a rain soaked Churchill Downs to become the winner of the 136th run for the roses.

In doing so Jockey Calvin Borel added his 3rd derby win. Borel who knows the quirks of Churchill better than any jockey stayed on the rail just as his did riding Mind That Bird last year. Borel came off the rail only once to past just one horse as he did aboard Bird.

Two weeks from today the Preakness and Borel says he'll ride Super Saver to another win. So this story is to be continued.

The best back story comes from George Vecsey with the New York Times:

Every Kentucky Derby is different, by definition: no horse wins it twice. Then there are the charming details of that day.

The 136th Kentucky Derby took on a life of its own at 5 a.m. Saturday when torrential rain, and thunder and lightning began to pelt the Louisville area, five hours ahead of the hopeful forecast that had been put out Friday.

Was nature finally stating its displeasure at humankind for making thoroughbreds race to the limits of their fragile ankles? Somebody was mad at somebody.

The organizers of the Derby took the unusual step Friday of holding a news conference to talk about the weather. Somebody from the National Weather Service claimed that rain would begin in midmorning but let up for much of the afternoon.

As of Saturday morning, that forecast looked extremely optimistic. The regular morning training was called off, but John Asher, vice president for racing communications at Churchill Downs, said security was the main concern.

Even baseball, with its dank nocturnal World Series usually putting a bummer on the end of the season, might have enough sense not to try to play on a day like this.

Given the general logistics for Derby horses and Derby visitors, delays are practically impossible. Churchill Downs was likely to use its new lights. The vagaries of weather are part of the charm of the Derby, I heard people say on Friday, although that may have been the bourbon talking.

Having a hotel room near the airport took on a charm of its own before dawn on Saturday as planes touched down before things became worse. I almost felt sorry for people who had spent fortunes on tickets and gaudy hats.

The weather looked familiar to me. When we lived in Louisville decades ago, I covered the occasional tornado out in the countryside that flipped mobile homes as if they were beer cans. My wife learned how to stop the car, grab the baby and head for the lowest ditch. Eighteen months after we moved back home, the killer tornado of April 3, 1974, roared right up Brownsboro Road and blew down buildings a block from our old house.

It gets nasty in this part of the country. But as people said, “The Derby is the Derby.”

Every Derby has its special characteristics, but only one horse can win each year. The winner could be Secretariat, the 1973 winner and subject of a current feature film, or it could be Mine That Bird, the improbable 2009 winner.

During the past week, as D. Wayne Lukas entertained the multitudes outside his barn, every time he wanted to talk about the vicissitudes of racing, his punch line usually was a muttered reference to Mine That Bird.

As obscure as Bird was, he ranks up there with Big Red — Secretariat, that is — in the only category that really counts: 1 for 1.

The logical question is: how does the weather affect the beautiful animals that everybody professes to love so much?

“It hits their belly and face,” Bob Baffert told The Associated Press. “They throw their head up, they lose interest and they get scared.”

Of course, he could have been talking about me.

The Derby is not without its hazards. I remember one particular sloppy Derby a decade or so ago when an elegantly dressed woman stepped onto the track and there was a loud slurp as mud devoured her high-heel shoes. (Other sports have their own bogs: at the Henley Royal Regatta years ago, my wife observed Princess Anne, wearing a gorgeous white dress, covered in mud, thoroughly unflustered, stopping to greet friends in a tea tent. Royal aplomb indeed.)

The other day I wrote that wise old trainers have seen fire and they’ve seen rain — a clear reference to the lovely James Taylor song. I totally forgot my first Derby, on May 1, 1965 — exactly 45 years ago — when Vic Ziegel, a sportswriter, and I drove down from a Mets trip to Cincinnati on a gorgeous morning.

Everything was fine until a part of the wooden grandstand caught fire. Jerry Izenberg, another sportswriter, recalled drunken patrons heaving empty bottles at the fire brigade just for fun, but fortunately the blaze was extinguished in time for Lucky Debonair to win the Derby — his first Derby, his only Derby.

All Derbys are the same, that way. Then there are charming details, like thunder and lightning, rain and mud, and hoping that is as bad as it gets.
Posted by Cedar Posts at 6:42 PM