Mike Brown's momma wants you to believe her son was a good boy. The attorney Benjamin L. Crump who climbed on the Mike Brown glory wagon representing the family, wants you to think the 292 pound 6' 6" 18 year old was executed in broad daylight.

Witnesses want you to believe Mike Brown had his hands up and was shot in the back. Protesters have carried the slogan "Hands Up Don't Shoot" into the streets and facebook and twitter are littered with images of African Americans in T-shirts sporting the slogan and carrying signs with the same message.

But as a pattern of Mike Brown's behavior and life in Ferguson emerges it seems Big Mike was just a thug.

There are the facebook photos where Big Mike is flashing gang signs. There is the "strong arm" robbery of the Ferguson Market and Liquor store. The owner of the business so fearful of the local "thugs" that he wouldn't call the police.

There is also the long standing distrust of the Ferguson Police Department, and a culture of violence and "thug life" that the African American community of Ferguson has embraced. This is not all Big Mike's fault, it is hard to escape the culture of "kill the police" and "Fuck the Po Po" which is carried from generation to generation. But it is also this culture that finds young black men laid out on the pavement with most of the grey matter of their brains dislodged from their skull.


The Brown family via attorney Crump asked Dr. Michael M. Baden, the former chief medical examiner for the City of New York, to conduct the separate autopsy. Dr. Baden provided a diagram of the entry wounds, and noted that the six shots produced numerous wounds. Some of the bullets entered and exited several times, including one that left at least five different wounds. 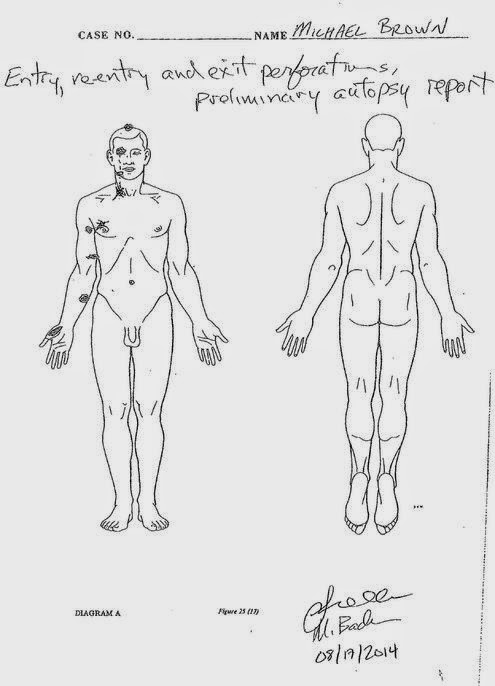 During a press conference Dr. Baden noted “This one here looks like his head was bent downward,” he said, indicating the wound at the very top of Mr. Brown’s head. “It can be because he’s giving up, or because he’s charging forward at the officer.”
One of the bullets shattered Mr. Brown’s right eye, traveled through his face, exited his jaw and re-entered his collarbone.
The last two shots in the head would have stopped him in his tracks and were likely the last fired.
Mr. Brown, he said, would not have survived the shooting even if he had been taken to a hospital right away. The autopsy indicated that he was otherwise healthy.

But attorney Crump at Dr. Baden's side quickly added: “The sheer number of bullets and the way they were scattered all over his body showed this police officer had a brazen disregard for the very people he was supposed to protect in that community,”

Dr. Baden conducted the autopsy at no charge though Crump paid for his airfare and lodging.

The St. Louis County ME released a preliminary report stating much the same facts, adding the Mike Brown had substantial amount of THC in his blood which would be indicative of recently smoking pot. It was also noted that Brown may or may not have had his hands raised.

One of the first videos showing the lifeless Mike Brown seems to support the idea that Big Mike was gunned down in cold blood. But also on the video is an eyewitness account where a man says:

#2 Because he ran, the police was still in the truck – cause he was like over the truck

#2 But him and the police was both in the truck, then he ran – the police got out and ran after him

[there is dispute here whether he says "doubled back" or "coming back."]

#2 The Police shot him

The link to the video with captions is here


Cedar Posts Take: Police are trained to "stop the threat" there is no training to "shoot him in the leg" and see if he'll surrender or shoot twice and see what happens.

Mike Brown at some point in his life learned that his size was his weapon. I doubt the strong arm robbery of Ferguson Market and Liquor was his "first time" as the casual nature of the robbery suggests that he'd gotten away with it in the past.

When Ferguson Police Officer Wallace encountered Brown he likely spoke to him in a fashion that "Big Mike" considered disrespectful. Then "Big Mike" assaulted the Officer in his patrol car and attempted to grab the officer's weapon causing the weapon to discharge at which point "Big Mike" made a run for it.

The position of the body in the street gives weight to the suggestion that there was significant forward body motion at the time he was shot and the autopsy supports this theory.

It looks like everyone is lining up either for or against the police officer. It's just politics as usual. For those of us who don't have a knee-jerk view and want to know what actually happened: Cedar, do you know if the authorities have any sort of video record from the police car? From the looks of things, the police department had a surfeit of equipment, so were their vehicles equipped with cameras and what did they show?

Crazy thing, the department apparently has in car dash mounted cameras in boxes, but has never installed them.

Here is a video of witness conversation right after. It seems that he continued to move toward the officer. I suspect the hands up thing is just something they made up.

With that said, I still think the police were wrong for only calling emergency services for crowd control (no ambulance) after the shooting. Ferguson emergency did not even know about the shooting until media called for comment. You can listen to those calls here.

Thug is a racist term just like the N word and you sir are a racist.

2:10 No shit! I went back and listened to the original YouTube video. I honestly thought the video on your link was fake and damn at 6:54 plain as day Big Mike turned and ran back at Officer Darren Wilson.

And the MSM is where on this?

Anon 2:47. You should probably look up the definition of thug. The closest reference it makes to race is Indian (due to origin)and even that is a stretch. A Thug is a violent person. That simple. Sometimes it is used to refer to a robber and since there is undisputed evidence of robbing the liquor store, well...

Cedar Posts is former LE and was fired for being a Rouge Cop who hates people of color. Some things never change like racist pigs. Thank Chief Monroe for seeing Cedar for what he is and firing this racist pig!

what's a Rouge cop? Is that some sort of cherry red sort? He was fired for being a red cop? Seems that would make him a cop of color in the literal sense. How about rogue (not capitalized) cop, moron. Grammar...check it out. This is why other countries are beating us at everything. Handouts don't make you smarter.

I don't know if "Big Mike" deserved to get shot or not...but it appears me as though if he didn't commit a crime, then he likely would not have had any contact with law enforcement that day.

The key to determining this case is the escalation on the part of the deceased. Every time an officer is present there is a weapon on scene; the fact that Brown was "unarmed" means nothing once he gets physical with an armed officer. If the evidence shows he even attempted to go for the officer's weapon, then I see no issue with the officer's actions

What the "Thugs" supporters don't realize is police officer's shoot to stop the threat when they feel there lives are in danger. Perhaps "thugs" should keep in mind, especially while they are unarmed, that police officer's are.

Shattered orbital bone? Big Mike had already inflicted serious injury on the officer and was charging back for more... well he got "more"...

As Cedar said early today via twitter if Big Mike's DNA is on the cop's weapon it is case closed.

So what happened to he was shot in the back with his hands up?

Doesn't that just amaze you how this stupid shit gets going. Had the niggers had it their way they would have lynched the on Sunday morning.

Weren't Burnett and Nobles killed by an unarmed suspect who grabbed one of their guns?

I wish he the deceased would have received the entire rounds fired from his magazine. If their department carries 15 rounds in a magazine, plus 1 in the chamber. This would have been a total of 16 rounds and officer's are trained to shoot until the agressive act stops.

Yes, both John and Andy were shot and killed by an unarmed THUG. He was able to gain control of their service pistol. We lost two good officer's this day, which was shot by some useless SHITBAG!!

Chief Rodney Monroe is a RACIST and a NIGGER!! He should not hold the position which he was hired for by the DUMB ASS CITY COUNCIL. ROMO doesn't deserve the respect or the title as the Chief of Police because he is a RACIST NIGGER.