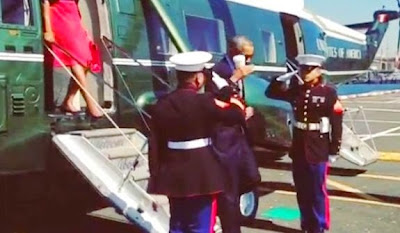 Obama doesn't know how to salute, I'd rather he just not do it.

Prior to Reagan, Presidents did not return the salute. Reagan pulled it off, but he was an actor.

There is no law requiring the President return the salute.

There's a photo of Bush 43 is being tweeted and emailed around, where Bush is carrying a 40 pound dog in a rain storm and saluted with his free hand.

The Marine to Barry's right has no less than six service stripes, yet I'm pretty sure Barry doesn't have a clue that the man he gave the latte salute to, has more years of service to our country than the big O will ever have.

Best part of the whole episode is that the White House posted the video not even noticing the faux paws.

If you have ever stepped on a set of aircraft or Helo stairs you know they aren't the most stable things, yet POTUS does not extend a hand to the First Lady.

Shockingly even without the Starbucks cup he looks dazed and confused. Almost like he's not sure where he is or where he is going.