A few weeks ago I banged out a half dozen tweets (twitter rant) after seeing 2 near pedestrian vs car accidents within a quarter mile of each other. The victim in each case, a CMS Middle School student trying to cross speeding traffic on South Charlotte's Pineville - Matthews Road (Highway 51 to Native Charloteans).

Main stream media types fail to take notice of such things, unless of course there is the dead body of a 14 year old lying in the road.

Case in point, Park Road where there were no crosswalks or signals until a South Meck freshman was struck and killed while trying to cross the street several years ago.

Even though main stream media types including WCNC's Dianna Rugg blew it off my direct appeal as not newsworthy, South Charlotte Weekly's Ryan Pitkin saw the need to spotlight my concerns.

His in depth look at the situation follows in part here: 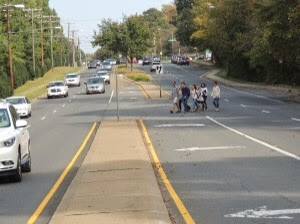 Students At A Crossroad

Five middle-school-aged children and three adults peer down Pineville-Matthews Road as westbound traffic barrels by at 50 miles per hour. It’s nearing 4 p.m. and traffic levels are starting to increase.

(Note: on the afternoon CP saw two students nearly hit while trying to cross highway 51 they were on their own, with no parents in sight.)

When given a wide enough gap, the entire group walks to the median, which consists of about four feet of concrete. They wait together a few minutes longer before crossing the two lanes of eastbound traffic. This game of “Frogger,” as one parent calls it, is a daily thing for these families.

The kids are students at South Charlotte Middle School (SCMS), which is tucked behind a daycare at the intersection of Strawberry Lane and Pineville-Matthews Road. The subdivisions they live in are just a three-minute walk from the school, save for the minutes spent waiting for traffic to zoom by before giving them a chance to cross the dangerous road.

Susan Slade, a resident of the Alexsis subdivision and mother of a seventh-grader at SCMS, spent nearly two years contacting the Charlotte Department of Transportation (CDOT) and Charlotte-Mecklenburg Schools (CMS) to advocate for road projects that would ensure the safety of children in her neighborhood.

After hitting a wall of red tape from government agencies and not hearing anything back from the school system, Slade became discouraged and is now skeptical any such project will come. She and her neighbors rotate turns, acting as a walking carpool, to meet their children on the south side of the highway and help bring them back home safely.

“I come out here because I’m a parent,” Slade said. “A lot of kids are impulsive. They want to get across safely but sometimes they just don’t make good decisions. They will do these dashing efforts, and sometimes they can’t anticipate a car’s speed. It’s just a bad scene.”

Although there is a crosswalk across Pineville-Matthews Road from Strawberry Lane, no students from the Alexsis or nearby Windswept subdivisions use it because it does not lead to their neighborhoods. Kids who use the crosswalk would walk through grass that slopes toward the highway and is often either muddy or covered in a green dye applied by the nearby golf course.

Parents have decided that crossing closer to their own neighborhood was safer, as the existing crosswalk is at the top of a slope for westbound drivers and the lack of a school zone on Pineville-Matthews Road means most drivers have no reason to slow down as they approach the intersection.

School zones are placed according to the school’s “frontage,” meaning the pieces of property that face the street. SCMS’s only frontage is on Strawberry Lane, and that’s where the school zone lies.
SCMS hired crossing guards on Strawberry Lane in the past to help children who live in the Raintree neighborhood cross safely, but the number of kids crossing to Alexsis and Windswept is comparatively low, and no crossing guard has been employed to help children cross Pineville-Matthews Road.

SCMS administration did not return calls by South Charlotte Weekly’s press deadline.
Kevin Earp, director of safety for CMS, said that a bus is available for residents of Alexsis or Windswept, if requested. Parents have said they don’t consider using the bus, which comes more than an hour before they would normally leave for class to take them one-fifth of a mile to school.

Parents have been told the relatively low amount of foot traffic between the school and the small neighborhoods on the north side of Pineville-Matthews Road is also a reason a crosswalk will probably not be placed in front of the subdivisions.

The rest of Ryan's article is here: http://www.thecharlotteweekly.com/news/2014/10/students-at-a-crossroad/

Of course the major news outlets in charlotte have no use for a story like this...it lacks an angle on race, sexism, or immigration.
Story doesn't fit the narrative for today's mainstream media. Plus its just a couple of white suburban kids so tough to feel empathy for their plight.

I saw Cedar's "rant" tho I'd call it just pointing out the obvious someone going to get killed.

The painted cross-walk goes to know where, unless you're playing golf. Don't blame the kids for not wanting to walk in the wet muddy grass.