From ABC News: The FBI is offering a $5,000 reward for information that helps them find the person who put raw bacon on the door handles of a Las Vegas mosque. 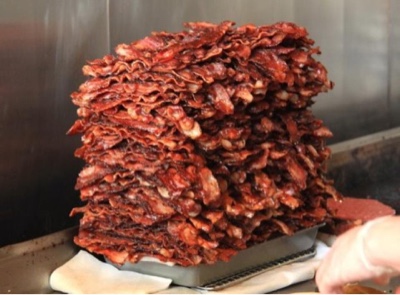 The FBI said in a statement Wednesday that agents are trying to find the man seen in a surveillance video putting the meat on the entrances of the Masjid-e-Tawheed mosque. Authorities call it a desecration of the Islamic worship center.

The Quran, the holy book of Islam, prohibits Muslims from eating pork, and pigs have been used to taunt or offend Muslims.

Both the FBI and Las Vegas police say they're investigating the case as a possible hate crime.

Las Vegas police spokesman Larry Hadfield said the bacon was wrapped on the door knobs, and was also found on the ground and fences.

Officials at the mosque couldn't immediately be reached for comment.

The FBI said the incident happened about 3:15 a.m. Dec. 27. The culprit is described as a white man wearing a dark blue hat, jacket and black-framed glasses. He had black or dark brown hair with long, thin sideburns.

The site west of the Las Vegas Strip wasn't damaged, and no one was hurt. The mosque was empty at the time, and the case was reported by members who came to worship later that morning.

Several threatening incidents at mosques have been reported in recent weeks. A Molotov cocktail went off at an Islamic center in Tracy, California, days ago, and a severed pig's head was found outside a Philadelphia worship site earlier this month.

Cedar's Take: Sort of makes you wonder what's going on at the Justice Department. Apparently Obama's hug a Muslim program includes tracking down people who like pork, the other white meat.

What a waste of perfectly good bacon.

The fence building technique also required some sort of wooden post to help support the wire between the behemoths.steel fence