Throw back Thursday - A Christmas Message posted in 2008 while I worked most the year in Charleston. If you haven't paid a visit to Charleston during the off season you are really missing out it is a fabulous city and not only are the summer crowds gone but the weather is 15 degrees warmer than Charlotte, Atlanta or Raleigh. Sunny days in the 70s and chilly nights in the 50s are the norm, thanks to being surround by water. 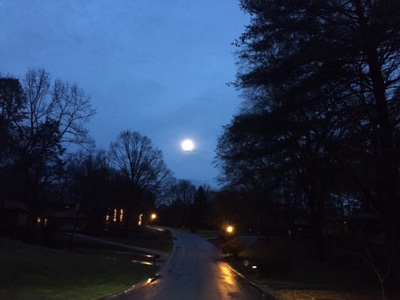 So flash back to 2008.......
Last year as I sat in 1st pew during our Christmas Eve Service, I listened to our well liked and highly regarded senior pastor, whose long winded sermon on Christmas was making its final dizzying lap which is always preceded by "in closing..." and I thought to myself, I could surely write a better Christmas Eve sermon.

I've got to tell you it's harder than I thought to write a good sermon, even more so when it's about Christmas. But here it is, my Christmas Message.

As I look out upon this cheerful sea of faces, taking in all that is Christmas, the hymns, the holly and evergreens, the candles and the many colorful Christmas sweaters and ties I am so very moved by the wonder of the moment.

Christmas is a wondrous time, a glorious moment that comes once each year in our Christian lives.

If you attended the children's Christmas Pageant on Sunday you experienced part of this moment and were no doubt moved to tears. Especially when one of the tiny shepards, tripped over one of the many sheep and they both nearly toppled off the stage.

The hours of labor that go into preparing the sanctuary for Christmas are countless, without the many volunteers none of this festive grandeur would be possible and I thank each one of you.

The youth group, boy scouts and altar guild sold poinsettias and Christmas trees again this year, raising money to support our food bank and to provide all of the wonderful flowers, poinsettias and greenery you see here this evening.

In our church as it is in homes, businesses and even places of our government, we celebrate the season with trees, songs, lights, and candles some of the many symbols of Christmas.

But with all of the grand and often spectacular physical attributes of Christmas we often over look the spiritual side.

So it is time to ask yourself, is Christmas on your mind because Christ in your heart? Or are you just caught up in the moment?

I recall the story of a little boy who in his purest of innocence understood the meaning of Christmas in his own way.

When asked what was the most important thing about Christmas he replied “having Jesus in your heart”.

Asked how he knew that Jesus was in his heart, the boy not more than three years old, announced "I know he's in my heart because when I put my hand right here, I can feel him doing a lot of banging I guess because he’s trying get out".

The other night I was doing a little Christmas shopping along King Street, and as I walked among the fog wrapped light posts, I could hear echoes of a Salvation Army bell ringer nearly a block away, muffled in the nighttime dampness.

Despite the weather, and the reports of slower than usual retail sales, the street was crowed with shoppers. A hired Santa with a real beard, stood in front of a jewelry store, his laugh was true and both his "Merry Christmas" and "Ho Ho Ho" were sincere. He was ringing a bell with one hand and nursing a fresh cup of steaming Starbucks in the other. I suspect people who look like Santa Claus year around have Christ banging inside their heart as well.

Around the corner on Queen Street, a young couple sang "over the river and through the woods" as they made their way arm and arm up the wooden steps of Pogan's Porch.

In contrast down the alley and up under the end of the parking garage stood Charles. He's not someone who you would notice, neither a panhandler or criminal, Charles keeps to himself. He's one of a dozen or so Charleston homeless men I see from time to time, wanderers who call the streets, parks and parking decks their home.

Charles is a veteran of the first gulf war and other then being homeless he's just like most of us. He is a father and calls his children when he has the money; he graduated high school and even attended college. Since he left the service he has worked in construction and several odd jobs, 2008 has been a trough year for Charles because he is homeless again.

When I think of Charles I'm reminded that I'm more or less just one paycheck away for being homeless myself and given the current economic crisis perhaps a good percentage of Charleston is not so different from Charles.

But we shun Charles; we look the other way, walk a little faster, even cross the street to avoid contact with him. As I pass Charles he smiles and says, a bold and joyful Merry Christmas!

Why would a man who is so down on his luck, whose heart must be filled with despair say Merry Christmas?

Because, Charles has Christ is in his heart as well, and despite the fact that this moment finds him homeless his heart is still filled with the joy of Christmas.

The other day I noticed someone had given him a new coat, no doubt a random act of kindness which was just paid forward with, a Merry Christmas!

And as I walk home, I smile because who among us could not notice it's Christmas.

But years ago, Christmas was not such a moment, it was not nearly such a big event, unless you happened to be a shepard.

In the stillness of the night, with a star filled sky above them, several shepards were stunned when a bright star completely engulfed them in light.

The Gospel according to Luke:

“And there were shepherds living out in the fields nearby, keeping watch over their flocks at night.

An angel of the Lord appeared to them, and the glory of the Lord shone around them, and they were terrified. But the angel said to them, "Do not be afraid. I bring you good news of great joy that will be for all the people. Today in the town of David a Savior has been born to you; he is Christ the Lord. This will be a sign to you: You will find a baby wrapped in cloths and lying in a manger."

Here tonight in this building that we call a church we’re protected from the rain and kept warm from the cold and here among family and friends we celebrate that moment that is described in the Gospel of Luke, a moment in time we now call Christmas.

But outside this fine shelter made of stone, gleaming marble and polished wood the cold wind blows and rain skirts the Palmetto tress and dampness finds its way into every open doorway and even past tightly closed windows, just as despair and loss can find it’s way into mankind’s heart.

With all we do to celebrate the moment that we call Christmas, the one thing that matters most needs you to make it happen.

This Christmas Eve, long after the stores along King Street have closed, about the time the bells at St Michael’s ring out across the Peninsula just shy of midnight, imagine yourself as a shepard out in the stillness of the night and remember all that is Christmas comes down to the one moment in time, more than 2000 years ago that changed the course of history forever, the birth of Christ.

It is up to each of you tonight and every night to spread the word of hope, peace and joy that this moment is all about, tell everyone.

Merry Christmas!
Posted by Cedar Posts at 3:26 AM