Which will disappoint the Black Lives Matter Crowd. So far nothing but crickets over the shooting of 25-year-old Joshulae Matthews-Vincent Carter
Perhaps this is why? 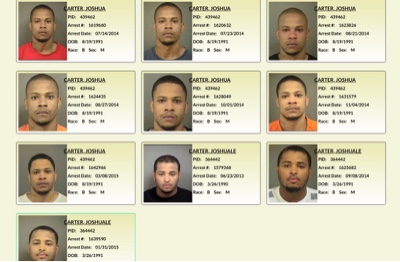 Assult with a deadly weapon, assult on a female, DUI, and this is just the tip of the iceberg. Many of the prior arrests have rolled off the MCSO on line data. These are only the adult charges.
Charges for tonight's adventure will include charges, three counts of assault on a law enforcement officer with a firearm, two counts of attempted murder, assault with a deadly weapon with intent to kill inflicting serious, assault inflicting serious bodily injury on a law enforcement officer, second-degree kidnapping, assault on a female and possession of a firearm by a convicted felon.
That is if he survives. The cost to taxpayers will be staggering. We are already well into six figures, Should his injuries prove not fatal society is on the hook for years of physical therapy special needs medical care for life, special prison care should he not ever walk again.
The above photo should have looked like this:

Such is what happens at 4 a.m. with an iPad. And NO the error was not deliberate.
Cedar Sidebar:
Twitter was a buzz last night with breaking detail and messages of support for CMPD Officer Andy Harris. Anyone who has been around CMPD knows Andy he's a somewhat Omni Present Force in the department.
So it seems interesting that while most of Charlotte was tweeting support for CMPD one city council member remainded silent. LaWana Mayfield's tweeter account at 2:00 am. 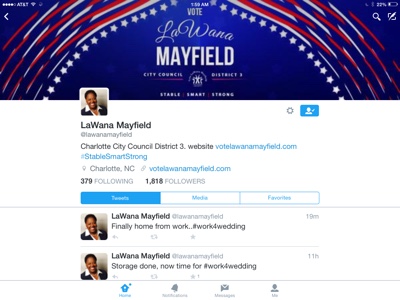 I am just a taxpayer who is proud of the officers who responded and showed great courage last night.

Lawanna is only concerned b/c she's about to lose another voter. Let's hope the officer isn't charged and railroaded like we've seen in the recent past with Rodney.

Why has THE Steele Creek REGION become a very dangerous place in the past 5 yrs?

"Why has the Steele Creek Region become a very dangerous place in the past 5 yrs?"

Well, increased population, bus service, proximity to more "dangerous" areas of town, the layout of corridors that do not support foot traffic (but do support cheap residential), and therefore support compartmentalization of neighborhoods/apartment complexes (but these communities are not "established," proximity to major thoroughfares and highways, and sadly...relative affordability. I don't blame patrol, but the area is a patrol nightmare; you can either post up near a development, hang out in the commercial zones, or just roll through...But you kind of have to pick your poison in any given hour. Most guys will have to roll through as they are running calls. As a native Charlottean, I hate to say it, you have to pay a hefty price for your safety and security these days. And if you can't afford it, you are SOL as you got on the wrong end of city planning and the local economy. Welcome to an increasingly bifurcated Charlotte. Gentrification requires new residential for the displaced folks who can't afford the rising prices, and the problems spill into a new part of town as it fills up with those who can't move into an outlying area and drive in.

I also hope the officer is not charged after being shot. That would be silly, but we are talking about CMPD. If there is a charge, that lets every officer know to just go on calls, and not engage a suspect unless he is actively surrendering.

5:13 "increased population, bus service, proximity to more "dangerous" areas of town, the layout of corridors that do not support foot traffic (but do support cheap residential), and therefore support compartmentalization of neighborhoods/apartment complexes (but these communities are not "established," proximity to major thoroughfares and highways, and sadly...relative affordability. "

Please organize a presentation with these and all of your thoughts to the morons who are voting through the zoning & developments that are destroying our city. ASAP. Please.

5:27, That's a lot of ground for me to cover. Unfortunately, Charlotte has had "Atlanta complex" since 1999 or so (When I noticed it, at least). Unbridled growth, development, become a 'world city,' etc. etc.

Urban planning is tricky...If you do it responsibly the people who are used to quick making money won't off rentals and commercial development. Or they will make less over a smaller period of time. Sounds like it would be a popular idea for the Queen City elite, huh? And the politicians!

The premature (forced) growth of our city was achieved due to the allure of economic advantage for all, but it was only for some sectors. Therefore, you had a huge, immediate need for housing from this growth. Some high end housing goes up from scratch, then you have historically low income housing (older homes, historic neighborhoods, etc) that become trendy. They're well built, so some of the high end customers go there, fix them up and the rest is 'good old ham and mayonnaise sandwich' gentrification.

This pushes the lower income folks out(who didn't enjoy any economic growth), many of whom are renters or inherit the homes and would be fools not to sell under such circumstances. This is economic displacement, and these folks...along with newcomers to the area need to find affordable housing ASAP. The answer to this for a while has been in Steele Creek, where you have some older subdivisions not eligible for gentrification, along with apartment buildings going up like crazy when you consider what that area looked like 15 years ago.

The problem is none of these areas are socially established because everyone is from some other part of Charlotte or not from the area at all. The city makes sure the bus runs down from the light rail, and developers make sure there's plenty of shops and fast food for the apartment dwellers (plus you have to have a McDonald's or it's considered a 'Food Desert'). All these apartments, bus lines, and affordable prices due to an out of the way location...what does this bring?

You guessed it, people with low paying jobs who may or may not have cars. When you don't have a car people come visit you. Lots of traffic coming in and out, some good, some illicit. There are good folks down there, but 8:38 made a good comment in his/her question--it really takes 5-8 years of this for an area to go down the proverbial toilet.

I read several news articles about the shooting, and reading between the lines it seems like Steele Creek is like every other trouble spot in Charlotte: A mix of young low income and fixed income elderly. That is a recipe for a neighborhood on the brink of collapse in half a generation. Happens all the time, all over, but it is still unfortunate. However, accelerated (again: forced) growth leads to accelerated downfalls for the not-so-lucky. This is not a racial thing, though bifurcation does run along racial lines quite a bit.

I'm not sure I have a solution, but there are definitely "Two Charlottes" now.

I'm just an East Charlotte boy who got out.

*Edit: I'm just an East Charlotte boy who got out of Charlotte.

Well, let's see, when you have an officer who is also on the swat team get in a use of force, not in any way involving swat, and then his immediate chain says it's ok, but IA sees it and says, "whoa hold on here this was against a black female" and decides to hold it's own investigation, and then the board not sustains the complaint, but a couple of select DCs decide they still don't like the outcome so one particular black female DC (maybe the one over swat....) decides she will just "indefinitely suspend the officer from the swat team to punish him???!!!! (whew that's one long sentence.) This is why officers feel that even though they are returning fire they will still be charged. I'm sure Mayfield has already been burning up King Putney's phone chanting "NO JUSTICE NO PEACE" But, then again, radio silence from the FOP or any other organizations.

Oh and Steele Creek ain't got nothing on the University area. Hood rat city.

True story on University area. But many of the same causes.

Metro is the hell mouth, that all hood rats spawn from! No argument!

Ah, the non sequitur crowd shows up...."My ass itches,"..."I like pie" The previous opinions about high level issues may strike you as odd, especially when folks seem so passionate about them. But as long as you 'do what you do,' and keep getting that check, then I'm sure you'll be fine, just fine. Keep your head down and say things that mean nothing. Quite a man you are, and a confident, even better child you're raising for sure...I can only forecast that due to your apparent, impressive and everlasting pursuit of knowledge. I'm sure those 'naysayers' are idiots and you somehow 'know.' Don't worry though, your opinions on posterior scratching and baked goods lets your adversaries know how complacent you are. But you'll be fine...Well, unless those high level issues don't reach into your realm...Let me say your line for you: "That ain't gonna happen."

If you need a translation into Walmart, or just want to chew the fat, please hit your keyboard (but not your wife/partner) until you reach Antondostler@yahoo.com