Hornets - You wouldn't know it walking around Uptown but the Charlotte Hornets are on the verge of making history when they take on The Miami Heat tonight. A win will advance the Hornets toward the NBA Championship. But Charlotte's reaction is yawnnnnnn.... and I can't really figure out why.

Cedar's Take: Always interesting standing in the den of thieves, shaking hands talking with several friends and acquaintances who wear the hornets nest badge, mere feet from some of Charlotte's most misguided civil servants.

Outside; no one seemed to care that a number of the CMPD Officers in attendance felt entitled to VIP parking. 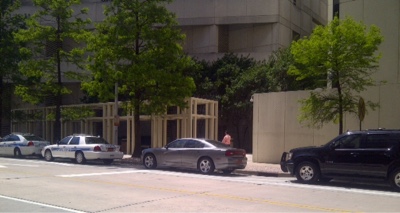 More than a dozen marked and unmarked CMPD cars lined the streets despite the numerous no parking signs. But CMPD wasn't alone with parking scofflaws, the Charlotte Fire Department showed their hubris as well. 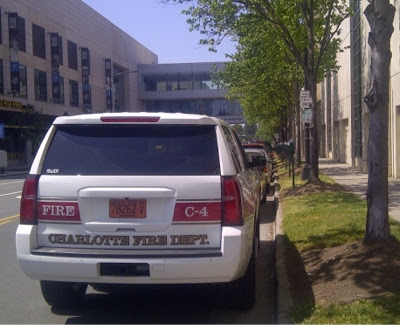 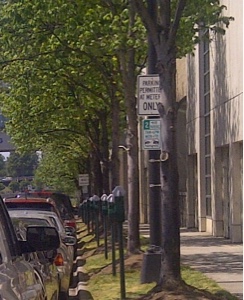 Of course Charlotte's Fire Department would reply saying their chiefs need to park there because they might need to respond a call. If that's the case maybe they shouldn't be attending a 3 hour political luncheon?

There's a reason the curb side spaces are marked "no parking" the parked SUV in the above photo creates a pedestrian blind spot at that intersection.  A number of spaces were removed after multiple pedestrian fatalities in recent years, a reason lost on some CFD and CMPD officers.

Inside the Charlotte Civic Center the conversation ranged from HB2 to homeless to Herion. Then guest speaker General Martin Dempsey took the stage to a standing ovation. The former Chairman of the joint chiefs of staff was not surprisingly warmly recived.

But CP was pressed for time and didn't stay around to see if the chicken and rice lunch lived up to its horrid reputation.

Shout out to CMPD Major Bruce Bellamey: I would have stayed to shake your hand but you were glued to your cellphone for better than 30 minutes. Come'on man tell your bookie you got a community to reach out to!

Wells Fargo Championship - Kicks off next Monday and once again CP will be tweeting and posting from inside the ropes. The course looks in great shape and while the field may lack many of the marquee players from year's past (notably Mickleson and Woods), it should be a great week for golf in the Queen City. 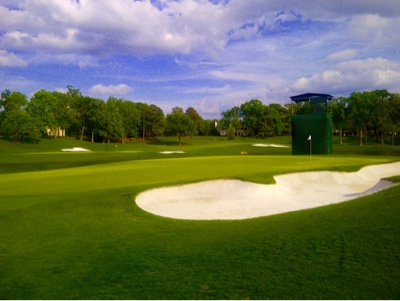 But on the Monday after tournament week the back hoes, and earth moving equipment take over the course. The change should be amazing.


From the local paper's former staff sports writer Ron Green , Jr. there is this unreadable and  unfollowable description of the changes.  Not that Ron's a terrible writer, just that Johnny Harris continues to use the Augusta National playbook, never saying much.

When the 2017 PGA Championship is played at Quail Hollow Club, the golf course will look significantly different than it will when the Wells Fargo Championship is played there in May.
Major changes are coming to the front nine at Quail Hollow as part of a master plan created a few years ago by course designer Tom Fazio. Club president Johnny Harris confirmed the changes but declined comment on the specifics.
The changes will not affect the Wells Fargo Championship, scheduled for May 5-8, where Rory McIlroy will be the defending champion.
The front nine will get three new holes starting at No. 1, which will be converted from a relatively short par-4 into a longer par-4 for professionals (par-5 for members).
The change will eliminate the par-3 second hole to allow for the new first green which will be located near the current second green.
The par-5 fifth hole will also go away and in its place will be a par-3 and a par-4 hole.
The sixth through ninth holes will remain the same.
The par-4 11th hole may also be redesigned, moving the green to add length to the hole. A fairway bunker will likely be moved approximately 80 yards farther from the tee to bring it back into play.
The design changes are part of a plan that began with the creation of a new 16th hole in 2013.
The work is scheduled to be done this summer when the putting surfaces are being switched from Mini Verde bermuda to Champion due to issues with the current grass.
With the PGA Championship at Quail Hollow in 2017, the Wells Fargo Championship will be played at Eagle Point in Wilmington next year before returning to Quail Hollow in 2018 and 2019. The club will also host the 2021 Presidents Cup.
Cedar's Note: Look for the CP folo after the tournament, when I'll post scans of Fazio's plans and the course changes. While I hear they are not the final approved plans they apparently are pretty much true to form. Yet Fazio is know to make crazy on site changes so it should be an interesting summer.

Bellamy is a buffoon.

There are a dozen parking decks nearby and the department comps your parking, so why use prohibited spaces? It just gives the department a really bad image.

We all know most of those in attendance where command and the smarter ones who came rode the CFD airport bus thing. It made a dozen trips from the LEC to the Civic Center. So why do a dozen of you think it is a Hornets or Panthers game?

Its not, its a freaking free lunch that most of you don't deserve because you don't do shit at your 9-5 desk job.

Now Cedar, you know the CFD can not be involved in Political Activity on or off duty, ask Marty Puckett. If C-4 is required to respond on an emergency the city is in major trouble. So best served that he be there making up stories about Tom Brewer, or the Wellness Coordinator, or any number of people that look forward to his and J Edgar's retirement

Cedar, looks like the FD has more than one person running around taking pictures of their cars parked where they shouldn't be?!?!

There is a certain FD Chief being protected by downtown who probably hopes no one is following him with a camera but wishful thinking.

Taking pictures of them in the wrong places dies no good. They condone senior management messing around with firefighters wives and cover it up. Teflon!!