The Boss Gives The Finger to Greensboro Fans and Venue Employees

Whenever a celebrity decides to take a stand, they run the risk of a major miscalculation.

Take Mylie Cyrus saying she'll move to Canada if Donald Trump is elected. Mylie who spends much of her time in the California sun nearly naked, didn't take into account that Canada's average annual temperature is only 48 degrees. 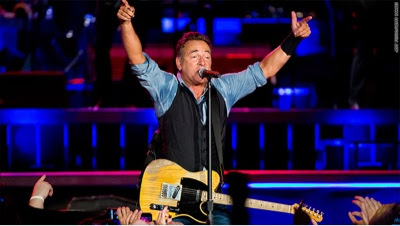 On Friday Bruce Springsteen canceled a Greensboro concert citing North Carolina's law known as HB2, but he apparently didn't think it through either.

"As you, my fans, know I’m scheduled to play in Greensboro, North Carolina this Sunday. As we also know, North Carolina has just passed HB2, which the media are referring to as the “bathroom” law.
HB2 — known officially as the Public Facilities Privacy and Security Act — dictates which bathrooms transgender people are permitted to use. Just as important, the law also attacks the rights of LGBT citizens to sue when their human rights are violated in the workplace. No other group of North Carolinians faces such a burden.
To my mind, it’s an attempt by people who cannot stand the progress our country has made in recognizing the human rights of all of our citizens to overturn that progress. Right now, there are many groups, businesses, and individuals in North Carolina working to oppose and overcome these negative developments.
Taking all of this into account, I feel that this is a time for me and the band to show solidarity for those freedom fighters. As a result, and with deepest apologies to our dedicated fans in Greensboro, we have canceled our show scheduled for Sunday, April 10th. Some things are more important than a rock show and this fight against prejudice and bigotry — which is happening as I write — is one of them. It is the strongest means I have for raising my voice in opposition to those who continue to push us backwards instead of forwards."
Cedar Posts isn't sure what all he took into account, had he given it some real thought he'd seen that canceling a concert was not a step in the right direction.

It's not like he decided to skip a tour stop four months out, no he canceled a concert 48 hours before he was to take the stage in Greensboro, North Carolina.

After posting the above he later added that fans won't be hurt because they can get a refund.

Well, that's little comfort to folks who planned an entire weekend around the Sunday event. Those who paid $115 dollars a seat and invited friends from across the state to come for the weekend, might just need to rethink their fan loyalty. 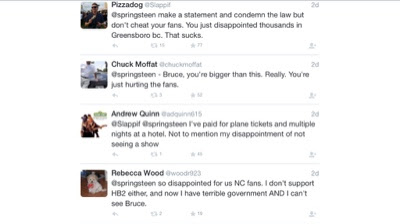 Lost on the one time patron saint of the working class, is the fact that many special event staff gave up part of their "real paychecks" to work the concert. Vendors, catering cooks and servers, counter clerks, parking lot attendants and staff, Cops who pulled a double shift last night so they could work the concert as secondary employment on Sunday, all now have nothing to do.

Someone should tell Springsteen is that beyond the 15 thousand fans and the estimated $100,000.00 the Greensboro Coliseum will forgo, are the estimated 213 contract employees who counted on this concert to help put a roof over their families heads.

Sure a refund is nice, so maybe "The Boss" will step "forward" and cover the rest of the real cost to fans, and the working class?

Fans who booked hotel reservations in town where not offered refunds, as are those who bought advance purchase airline tickets to get to Greensboro.

Even getting a refund from Ticket Master is a hassle, something "The Boss" has apparently never had to deal with.

Then there are Limo drivers and Uber drivers who rearranged their weekend to work the concert that are now without. Dads, who gave up their every other weekend visitation so they could take in the concert, spent Sunday night pondering the prospect of the next 2 weeks without seeing their kids. Local babysitters who counted on that little extra income on Sunday night, to help get by until payday with also be hurt by "The Boss". 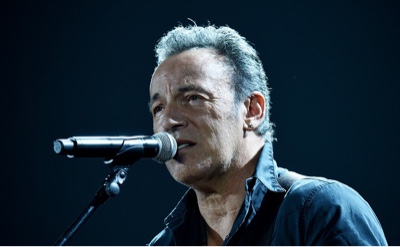 If Springsteen wanted to hurt North Carolina politicians he certainly missed the mark.

Flipping off your fans is one thing, but kicking America's working class in the teeth is just not what you'd expect from a one time working man's folk hero who at 66 is sadly out of touch and apparently desperate to remain relevant.

Sure hope he enjoys his ride on the politically correct band wagon.

Charlotte and NC suck. Time to move out of this godforsaken state.

Greensboro? Well that pretty much says it all right there. His entire tour is small venues with sold out arenas because he lives in a vacuum and wants to believe his is a rock star.

If City Council would expend the amount of energy on the protections of its employees that make less than 100,000 dollars a year and elimination of discrimination/targeting against all people that don't drink the kool aid maybe the city could be a better place to live. They complain the NCGA is horrible but they discuss LGBT concerns while African Americans in the City Workforce are targeted, women are fired and less qualified personnel are promoted or given pay raises for covering up the above or worse. The discrimination of any people for there lifestyle or sexual orientation, race, religion, creed or any other reason is against what this country stands for, however City Council really shouldn't blame anyone else for causing problems when they turn a blind eye to problems within city government. The amount of money spent on attorneys to defend wrong doing of city officials in the last five years would be enough to reduce the overall tax rate. Fix your house then talk about Raleigh.

I never thought that the queers and steers were Springsteen's target audience. I guess I was wrong.

Might be the most press "The Boss" has seen in years.

Homophobic bigot nothing more than that. 1000s of people agree with Springsteen's boycott of North Carolina so you and your back woods redneck kind all six of you need to just STFU!

Never mind the same or similar laws in other places which is similar in nature.

#deadintheUSA #burnspringsteenrecords if they can protest us, we can return the favor and boycott them #boycottspringsteen #boycottpaypal (Ringo not worth it)