Keith Scott's Cause of Death Lifetime Of Poor Choices

Keith Lamont Scott's life came to an abrupt and sudden end a week ago. His death is the result of a lifetime of bad choices! Something totally lost on the Black Lives Matter crowd.
Scott had been convicted of assault with a deadly weapon in two different states and convicted of assault in three states. One of the charges was a plea he actually shot a man. He had been hit with “assault with intent to kill” charges in the 90s. His record  included “assault on a child under 12” and “assault on a female.”
His wife took out a restraining order commonly known in the courts as a 50b, just last year. The woman who on video yells at police "he aint got no gun" and told the gullible main stream media he has never owned a gun. Yet, told police last year that he owns a 9 millimeter, Block (Glock). 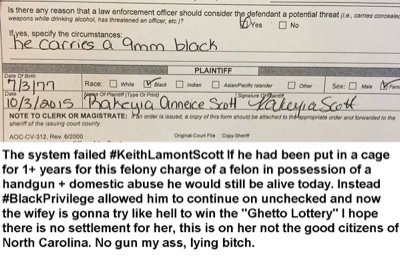 The media spin; “Family and neighbors call Scott a quiet ‘family man.’”
Nothing says “quiet” like “assault with a deadly weapon with intent to kill” and nothing says “family man” like assaulting women and children.
Keith Lamont Scott, the latest martyr of Black Lives Matter and main stream media, was shot while waving a gun around. He had spent 7 years in jail for “aggravated assault with a deadly weapon.”
Now officers had no idea that Scott has no trouble pulling a trigger, that he beats his wife, assaulted a child under 12 or served time is prison for shooting someone. All they know it there a guy, with a gun over there, and he is totally non-compliant, when given clear loud and reperitive simple order "DROP THE GUN"!
Scott's cause of death was four to the chest, it was a lifetime of poor choices. Drugs, B&E, Assault, Guns, moving to Texas from his native South Carolina, then a number of failed marriages, kids, more drugs, and the chains of the events in his life linked together like the shackles of slavery. For Scott there was no escape, the die was cast, his live of crime would end this way. And maybe it was his choice.
Posted by Cedar Posts at 2:23 AM

This IS the very definition of "Family Man" when you live the thug lifestyle....

And this guy worked as a "Mall security guard"? Would like to know which mall that was. Sounds like someone in HR there is asleep on the job....