U One Week Left - And the madness finally comes to an end. - Or does it?

Anthony Wiener - aka Carlos Danger spends his nights sending text messages to a 15 year old Gaston County girl, telling her he's "Hard" so the Fed's grab his iPhone, iPad and Laptop. Of course they are looking to nail his sorry ass to the wall, but hey wait what the heck is this???

The feds discover 650,000 emails are on his computer that belong to Hillary Rodham Clinton. 650,000 that's Six Hundred and Fifty Thousand emails. Not on a Gmail server but on the "hard" drive of a laptop.

The Clinton operatives go totally defensive and promptly claim that the emails are neither to or from the HRC secret (aka private) server. Well of course not, this is the back up stash given to Hillary's gal-pal Huma who just happens to be or was married to Anthony Wiener.

So here you go, this is where this is all going,  -  it is no longer about did HRC violate the law with regards to her private email server, its about perjury and obstruction of justice. Hillary has said time and time again, she didn't recall, she didn't, and that is was only bad judgment and a mistake. Cedar's money is on the email's are the smoking gun, to a massive cover-up. And its that's the case it will indeed be "bigger than Watergate".

Panthers Finally - The Carolina Panthers finally figure a way to get a win that was a "team effort" and what does Cam Newton do? Number "1" starts crying about getting hit outside the pocket, "I don't even feel safe" followed by "I'm going to talk to Roger Goodell".

Cedar's Take: Cam, time to put down the pom poms and get in there with the rest of the varsity. 9 Roughing calls since 2013 that's more than Brady, Big Ben or Rodgers. Once you leave the pocket you are not a QB your are Steve Smith a very big Steve Smith and its gonna hurt when they try to take your head off.

Hillary's Blue Collar Roots (Not) - Hillary Clinton loves to tell crowds she was raised in a working class Chicago family that taught her a "blue collar" work ethic. Well that's bull shit. Around Charlotte we would compare Park Ridge to Myers Park or Eastover in the 1950s.

In the late 1950's and early 1960's Park Ridge was the place for up and coming families. New homes, wide streets, new schools and churches and planned communities. The well off white Americans that could afford to live in the Chicago suburbs and drive to work or "ride the train" rather that take the "L" or street car to work, paid the high prices to live in these new larger homes.
Chicago's working class lived several miles into the city in places like Jefferson Park. The home in the above photo is where my mother grew up and attended Taft High School. This is a "2 flat" a vertical duplex. My mother, her parents, brother and sister, lived on the first floor another family lived upstairs. A shared garage accessed via an alley around back. It was modest, but a comfortable life.


Her father, my grandfather was a welder at Mars Candy Company and walked to the factory just down the street about a dozen blocks away.

Just down the street from Hillary Clinton's home the (Members Only) Park Ridge Country Club.

It is sad to see the world buy into Hillary's lies, and fabrications that she's been telling for so long she actually believes them to be true. But like taking sniper fire in Bosnia, the liberal media gives Hillary a free pass and she see's that as validation, so it must be true.


BRB Just Crashed Into a Cop Car - A 19-year-old student at Texas A&M University was arrested on Wednesday night after police say she crashed her SUV into the back of a parked cop car, while taking a drunk and topless selfie.


A police officer in Bryan, Texas was interviewing witnesses in response to a disturbance call on Wednesday night when an SUV ran into the rear end of his police cruiser, according to the police report.

The officer described in his report how he approached the SUV and found Miranda Kay Rader scrambling to put her shirt back on, although her bra still unfastened.  He also described observing an open wine bottle in her vehicle. 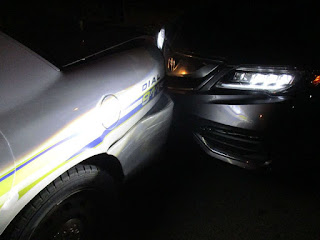 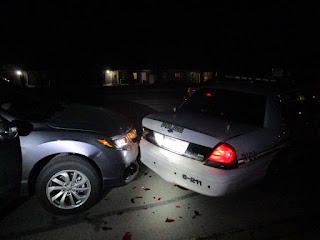 Rader apparently explained to the officer that she was driving back to her dorm room and was trying to send a Snapchat photo to her boyfriend in the moments before the crash.

Although she did not report any injuries, Rader was taken to the hospital to obtain a blood sample after failing part of the field sobriety tests.

She was then arrested and charged with driving while intoxicated with an open container, and also received a ticket for being a minor in possession of alcohol.

Rader was held in the Brazos County Jail until posting $2,000 bail on Thursday morning.