Friday Wrap Up - Curse Of The Goat Edition

"Loveable Losers" one of many nick names that earned the team the perception of being the worst team in baseball. "Cubs End 108 Year Drought" somewhat misleading as well. "Finally" well just depends, on who you talk to and their perspective.

As a team the Cubs have always had an impressive following. Wrigley Field has basically remained unchanged over the years, yet the team remains in the top ten attendance rankings year after year.

About that goat - Murphy, the goat was banned from Wrigley Field because, well goats tend to smell bad, and not please about his pet's dismissal the owner of the goat William Sianis put a curse on the Cubs.

There are various versions of what happened when William Sianis showed up at Wrigley Field with his guest "Murphy".

The most popular one goes like this: The ushers stopped Sianis, told him no animals were allowed in the park. Sianis appealed to P. K. Wrigley himself, who confirmed the decision: “Let Billy in,” the Cubs owner said. “But not the goat.”

Sianis, incensed, demanded an explanation. And Wrigley gave him one. “Because the goat stinks,” he said. No matter the version of the story, this part is not in dispute: Sianis told Wrigley, “The Cubs ain’t gonna win no more, the Cubs will never win a World Series so long as the goat is not allowed in Wrigley Field.” When the Tigers took three out of four to win the ’45 Series, a telegram arrived in the offices of P. K. Wrigley: “WHO STINKS NOW?”

And thus the Billy Goat Curse was born.

For years, the Cubs and the Sianis family tried to make amends. In 1969, a year before he died and with the Cubs running away with the NL East, Bill Sianis — whom the great Mike Royko would eulogize as “Chicago’s greatest tavern keeper” — declared the curse officially over; but it didn't help the Cubs finished well out of first place.

In ’84 the Cubs invited a goat to Opening Day, and after 39 years the team finally finished in first place, but lost the division.

So maybe the curse has finally been lifted.

About Fly The "W" - The storied history of the W runs better than 100 years, so no better place to uncover the myth and facts about the flag than via the Chicago Tribune. 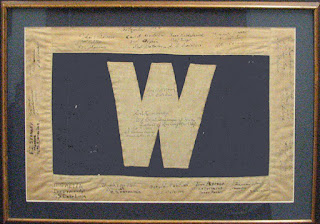 Cedar's Take: Baseball is somewhat new in the South. In 1966 Atlanta investors convinced Major League Baseball that the South would indeed support baseball. Ted Turner made the Braves a house hold name with TBS which went head to head with the Cubs when WGN Chicago's entry to cable television.

So how is it that a Southerner is a Cubs fan? Well, the Braves and the Red Sox (Mrs. Cedar's Team) had a tough season, so its pretty easy to drop back to the time when the family chased jobs in the epicenter of the industrial revolution. Cedar's Grandfather came to Chicago in 1946 working for International Harvester and soon became one of those fedora and suit wearing gentlemen in those photos of Cub fans in the 1940's. His glove and baseball from 1945 have resided on my office bookshelf since his death 26 years ago. 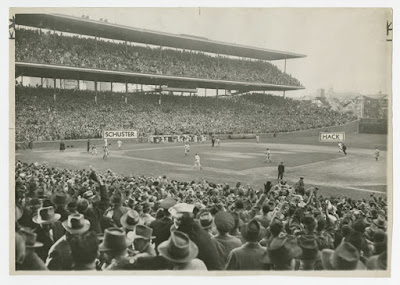