I'm starting to believe this racism stuff is just way over blown.

Clearly that's the case at Lipscomb University in Tennessee, where a group of black students were invited to a dinner reception at the university president's home. One student's reaction and her public rant (below) is typical of African Americans who feel they are being slighted at every turn. This is just one example of the way over blown craziness. 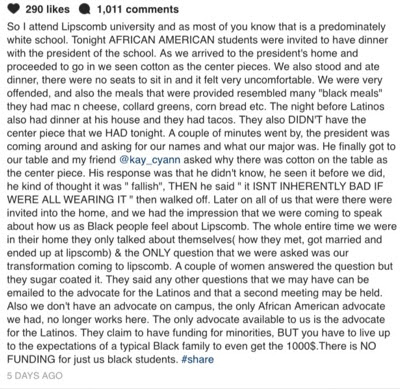 Maybe its time that Black Americans just suck it up to get along with the rest of America?

Take our Lipscomb University student. She's offended because of the president's wife likes plantation chic, barn wood, mason jars, cotton stalks, dried flowers and more. Was she offended by the "plantation shutters" or the recycled blue jean table clothes and napkins as well? 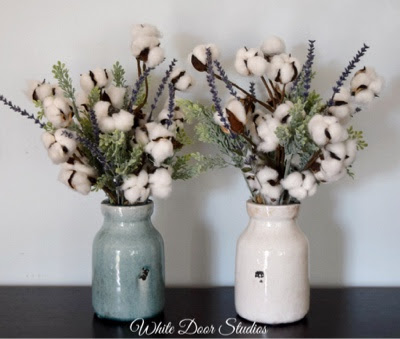 By the way "plantation chic" is really hip, thanks to an Asian woman named Joanna Gains from Waco Texas. Sort of doubtful she's a racist neo Nazi bigot. But you never know I guess?

Our college genius added that they were forced to eat standing up. Clearly she's not very socially aware, because that's the way a lot of social dinner parties are and have been for decades. But her thinking apparently is; "I'm not good enough to have a seat at their table" so they are racists!

Miss I'm a "sophisticated black women" (she calls herself on her Facebook page), was also offended because the hosts served collard greens, mac and cheese and corn bread. She also called out the hosts for serving "black meals" the same sort of food you would find at my grandmother's house on Sunday afternoon, the only thing missing would be fried chicken and watermelon. You see we are southerners and we eat like that at parties.

Then she goes on some rant about there not being a "African American Advocate" on campus and the lack of "financial assistance" in other words free stuff.

Never mind that her grasp of English is more that of an 8th grader than a college Junior.

So lets see what didn't happen; the black students weren't patted down before entering the house. They were not served "out back" from the rear of the kitchen on paper and plastic while the white people eat inside on china and silver. They didn't have their purses searched before they left the house in case they stole the silver, and they weren't asked to "weed" the garden or "shine" some shoes to pay for their meal.

Yelling "Racist" is nothing new.

I remember my brother firing a black women in the late 1990's because she was stealing food from the restaurant he ran. He told her he wasn't going to prosecute her, because he figured she was stealing to feed her kids. He noted that 28 pounds of chicken he found in her car would feed a lot of kids.

She immediately started yelling that he was firing her because she was black and accused him of being a racist.

I'm an American and by heritage a Scot, my family history dates to before the American Revolution perhaps as early as 1719. My wife is Irish her father's name O'Henry her mother's O'Dell. Movies like Brave Heart and television shows like Outlander don't offend me even if they made the Scots look rather backwards and pigheaded with odd customs and lack of respect for women. Irish Spring soap commercials or Lucky Charms don't seem to offend my wife.

Germans like their coffee thick like motor oil, so when my German host offered me "American Coffee" last weekend during a dinner party, I wasn't offended, even though I'd rather not have my coffee watered down. I politely worked my way to the kitchen dumped the McDonald's weak coffee in the sink and smiled at the hostess while I loaded up on the good stuff and quietly enjoyed my caffeine high.

Apparently I missed a chance to be offended?

Last summer Mrs. Cedar and I attended the funeral of a black co worker. The church was hot inside and the ushers gave out hand held fans to those in attendance to cool themselves. On the front of the fan the 23rd psalm and on the back a photo of Barrack Obama. We thought that it was an odd place for a picture of the president but we were not offended.

But black folk are different.

Darius Rucker was offended years ago while attending a dinner party at Isle of Palms near Charleston. Apparently he used the guest bathroom and discovered the walls decorated the vegetable and fruit crate labels from the 1940s and 1950's. 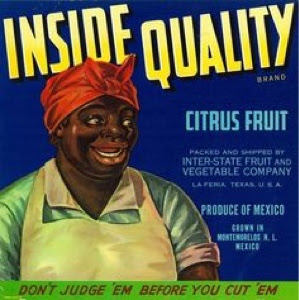 I don't know the full story, just that he left in a huff after being offended about "that racist shit in the bathroom".  After Rucker left the guests all made a trip to the bathroom to see what the big deal was, mixed opinions abounded, the colorful art work was either "cool" or "tacky" but no one, not even other black guests found it to be racist anymore than Uncle Ben's rice or Aunt Jemima syrup.

I have a cousin who does the same thing, "we an interracial couple" she tells anyone who will listen, as if anyone cared? But what's odd is her husband is a very well though of and apparently successful physician. But she doesn't introduce him as such.

So the question is who is really the racist in these situations?

My brother and I are a lot alike, we don't see color. What we do see is a lot of, chip on your shoulder, race card playing people who just happen to be black using slavery and racism as a crutch to get through life.

Maybe African Americans need to raise the bar on being offended?

Maybe you should take your racist white ass back to your parent's basement with your Nazi flags and bigot asshole blog. Crawl but under that white supremacist rock you live under and shut your fat pie hole!

Who doesn't! Chocolate or pumpkin pie are the best !!