Three major networks with vast operations equipped with state of the art news gathering technology and 1000's of staff on their payroll. Yet they each progressively embellished the other's breaking story. 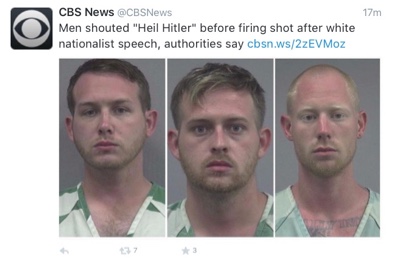 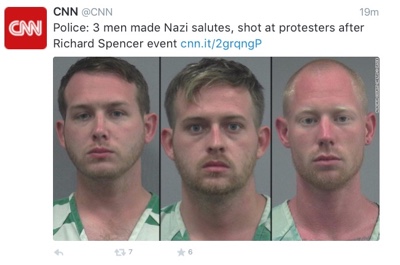 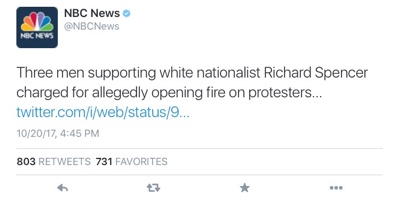 The progression is pretty clear, shot, then shot at, then opened fire on protesters.
In reality these 3 redneck dumbasses from Texas showed up at a Richard Spencer event in Florida with the idea of taunting protestors while riding around with their confederate flag decorated Jeep. At one point the three stopped to argue with a group of 8 people waiting at a bus stop.

When one of the 8 protestors hit the Jeep with a baton (baseball bat, or club depending on whose account you read), two of the idiots talked the other idiot into firing his hand gun, pulling the trigger with the gun pointed skyward but toward the protestors.

Police charged these morons with disorderly conduct, assorted weapons charges and attempted murder, although it's expected that the attempted murder charge will be reduced to unlawful discharge of a firearm inside city limits.

One shot fired harmlessly into the air is not opening fire on protestors. I am not even sure I'd call a group of eight people standing at a bus stop a group of protestors.