Mrs Cedar and I have enjoyed Red Rocks in South Charlotte for more than 20 years. It's our go to place where we always feel welcome.

So, what should have been a quiet dinner for 2 turned into a surreal night, of odd.

Admittedly I'm a voyeur, so much so that Mrs Cedar often accuses me of being obsessed with noticing things or as she calls it going all Jason Bourne paranoid. I don't know why but I've always been this way.

I scan the crowd for potential threats, size up the staff, check the location of alternative exits. I notice what people are ordering, the pace of the service, couples, families, friends, singles at the bar and so on.

Inside 90 seconds I can tell you more about the people around me than most people will notice all night. A large party celebrating a birthday, the guest of honor in his 80s surrounded by a dozen friends and family. A young couple enjoying date night, laughing holding hands. A four top table with parents struggling with their date night that mistakenly included their two toddlers.

The table of 6, 3 men 3 woman in the center of the restaurant I notice, ditto with the two uniformed CMPD Officers, because both tables stand out.

The officers because they are in uniform and its her birthday even though they have told no one. 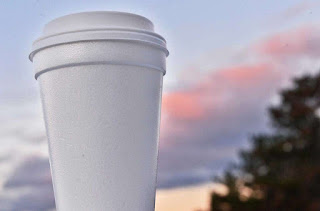 Yep, Styrofoam cups with lids and straws, like parents often do for their five year olds as temporary sippy cups.

Styrofoam cups, themselves are not odd, at least not at Showmars, but they sure did stand out at Red Rocks. So much so that 2 of the girls in the large alcohol fueled birthday party asked the table of six, "what's up with the freaking Styrofoam cups?"

Obviously in their groove, just ignoring the birthday girls wasn't going to help. So a few minutes later they asked the table again what's with the "to go" cups?

Mrs. Cedar and I, watched this unfold cautiously. But with 2 CMPD officers next to us we were not too  worried when one of the muslim women responded "it's not any of your concern, what's the big deal?"

Finally the birthday group left but not before taking selfies and photos of the table filled with Styrofoam cups.

So seriousl question, what's up with the freaking Styrofoam cups and straws? Is this some relogious thing I'm not aware of, phobia of drinking after Christians?
The highlight of the night? Someone in the large and very loud birthday party paid for the CMPD Officers dinner.