Throw Back Thursday "Freedoms Being Lost" 1979

The more things change the more they stay the same. Back in 1979 a speech was given to a large gathering of Charlotte business leaders during the Charlotte Rotary Club’s annual public business luncheon held “Uptown” at the then new Radisson Hotel. The subject government over reach and ”Freedoms Being Lost”. What follows are a few highlights of that speech: 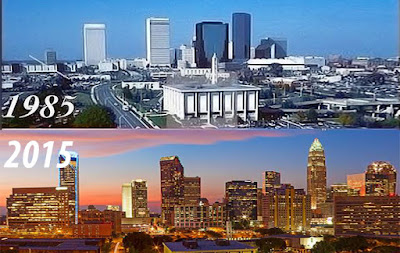 American’s are losing their freedom in the name of “public interest,” do not give in.
Don’t be a part of a group that gives up its long-term freedom for a short term gain.
Freedom is a free-market, and free enterprise; free to produce, discover, invent, experiment, to succeed, to fail, to profit, and to consume all on a voluntary basis without interference by the policing powers of the state.

It is a fact, that government control does not work, and it has been bad and getting worse for all who have tried it.

Let me illustrate how we are moving in the direction of more and more government control: In 1960 the federal government had 100 programs, while today it has grown to more than 1,200.


In 1930 government spending accounted for 12 percent of the gross national product whereas today it is nearly 40 percent. By the year 2000 at the current rate of growth it will be 60 percent.
With the free enterprise system we produce 28 percent of the world's production with five percent of the world’s population. After we feed ourselves, we export 60 percent of our wheat and rice, 50 percent of our soybeans, 20 percent of our corn, despite the fact that since 1940 the number of framers and farm workers has decreased by 66 and 2/3rds percent, because during the last 40 years, our output has increased 75 percent.

Contrast this to the Soviet Union, who after 63 years of Bolshevik Achievement is still dependent of western technology for food. The obvious flaw, a lack of creative thought, no incentive to achieve more by the masses.


Contrast our free enterprise system with the so-called “best of each" Democratic - Socialism, Sweden’s “cradle-to-grave” protection that now dictates the color of a man’s house. For this guidance, the average Swedish worker pays $4,125 annually in taxes from his $11,000 per year income. The British man pays taxes of nearly 60 percent of the national income.
Today 130 million man-hours are spent each year filling out government forms at a cost of $25 billion. Government then spends another $15 billion processing its own paperwork.

Regulations that have become detrimental to the free enterprise system, include those requiring truckers operating between Cleveland Ohio and Jacksonville Florida to make return trips empty; Greyhound bus cannot have age qualifications for drivers and the company was recently ordered to pay $19 million to unknown short people because of its rule that drivers must be at least five foot, seven inches tall.

Recently the Continental Can Company paid $100,000 for ear plugs, but OSHA demanded $33 million be spent to build sound shields because some workers were too ignorant or obstinate to wear the ear plugs.

The washroom scene is so sad it’s funny. Two federal agencies are currently fighting over jurisdiction of the nation’s toilets. OSHA says women’s restrooms must have special lounge facilities, but the EEOC says; if that is so, then men must have equal couches and chairs.

Americans can combat this trend toward more and more government control by sending money to free enterprise groups such as the “Council for a Competitive Economy” and stop sending money to those colleges and universities whose faculties are hostile to capitalism, and support news media which are either pro-business or at least professionally capable of being fair and accurate in the treatment of pro-capitalist ideas.


The speaker was my father and his well-received remarks were reported in the Charlotte Observer.
Surprising that so many of the issues that concern us today were just as much a concern nearly 40 years ago.


In 1979 Charlotte’s population was just over 300,000, I-77 had recently been extended to the south of Charlotte, all the way to just past Rockhill. The Charlotte Knights were called the Orioles playing nightly during the summer in Dilworth.
Note Fred Smith’s Council for a Competitive Economy is now called the Competitive Enterprise Institute.


Dad’s projection of 60 percent government spending by the year 2000 was off by a few years. Spending did in fact triple from just under $1 trillion in 1979 to $3 trillion in 1999, but it wasn’t until 2009 that spending pushed past the 40 percent level. It remains today at around 38 percent, much of it lost to bloated budgets, fraud and waste.
Posted by Cedar Posts at 9:23 AM