Once Again It Is Easter.... Please be seated.

Years back, when Charlotte was a lot smaller and the pace of life a lot slower, an Easter Sunrise Service was held at Providence High School.

As the headlights of two hundred or so cars streamed into the parking lot, the crimson and purple hues of the sun's first rays began to touch the far eastern corners of the Carolina horizon, while birds sang in wonderful orchestra we call nature. 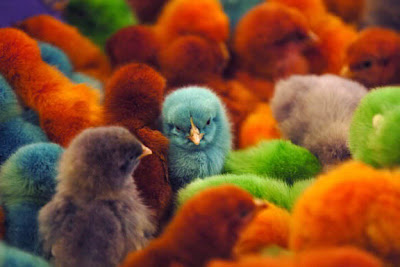 It's not hard to see the hand of God on Easter Sunday in the Carolina's. Azaleas, Dogwoods, rainbow colors of flowers all in bloom and Carolina blue skies which might explain the large number of churches in the Carolinas. I think there are 87 on the Charleston Peninsula alone, I know there are twice that many in Charlotte and the biggest of which is Calvary.

Standing at the corner of Rea Road and Highway 51, Calvary is so big that it's pipe organ is second in size only to that of the Mormon Tabernacle in Salt Lake City. It is a big church, so big it has escalators to the two balconies. 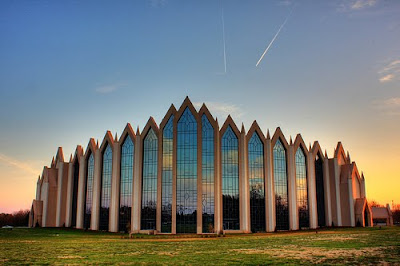 The church was once painted a somewhat a dull shade of pink and, was nick named by members and non-members as "The Pink Church" or the "Mary Kay Cathedral". Calvary was founded by Dr. Ross Rhodes who at the time of this Easter sunrise service was senior pastor.

Charlotte is of course the well known home to the famous preacher Dr. Billy Graham, and a close second to Billy Graham is Dr. Rhodes. I think Ross Rhodes could make a believer out of Satan if given the chance.

My grandmother used to tell us to sit up straight in church so that God knew we were paying attention. On this Easter Sunday, the frosty cold aluminum bleachers of Providence High School Football Stadium made certain we were all sitting up straight and paying attention.

The hot coffee and warm biscuits from Bojangles that the Calvary volunteers handed out, helped ease the chill but it was so cold, that I soon began to plot an early exit back to my car.

I'm a morning person, most of the time and I love to watch the sunrise. Cold on the other hand I'm not nearly as fond of, so I thanked my sister who was kind enough to bring an extra blanket to sit on.

Before the small choir had finished the second verse of the first hymn, my biscuit was cold and my coffee gone.

In the faint half light of the early dawn Dr. Rhodes rose from his seat and walked over to the podium, for all practical purposes it was still dark.

His sermon was simple….. his first words where.....

And with that voices came to life through the gathered crowd as these words were repeated and rose on wisps of steam from our breath which filled the cold morning air.

"Now if this had just happened today, on this Sunday morning, we would have proof! There would be satellite trucks, and news media everywhere. Anderson Cooper would be live with eyewitnesses to interview, and there would be full page photo spreads in USA Today, the New York Times and the Charlotte Observer. There would be a "film at eleven" on television that would show the massive stone rolled aside and for the next forty days Jesus himself would hold press conferences right up until ascension.

And he would tell the world: "Hey, I'm back for I have risen!"

"But, because this single event occurred nearly 2000 years ago we don't have a film at eleven, but we do have eyewitness accounts and interviews with the Oprah of the day whose name is Mark, and his interview is right here".

And as he spoke those words, Dr. Rhodes held up his bible the one he has carried for nearly 40 years and proclaimed.

"It says right here…" HE HAS RISEN!

With that a flock of Canada Geese flew over head no more than a dozen feet above the bleachers, winging their way no doubt to eternity and just as suddenly the sun rose above the horizon and bathed the bleachers in wonderful light and warmth that you could feel all the way through to your soul.

And I have got to tell ya ... I don't know how Ross Rhodes pulled it off but his timing was perfect. Within an instant the chill in the air was gone as a new day had begun.

Dr. Rhodes' message has always been simple… "Believe in the Lord Jesus and thou shalt be saved" Period!

No fancy church or nearly drowning style of baptism, pilgrimage to Mecca, or giving up a certain amount of your paycheck, no course of study, no special communion, no specific number of Sunday school sessions or bible study attendance required, just one simple thing.

"Believe in the Lord Jesus and thou shalt be saved" - Just Believe!

Hey Ced, is Vicki Foster going to lose your job over talking about Rob Dance's small penis? I know there is a law suit with the city. Will the pay out cost me my raise??

We better get our fukin raise! I don't want Mike Peacock to have to con any more people with his ACN ponzi scheme BS.

If you had to be one choice...which would you choose?

So what's the scoop about Cecil Brisbane and Veronica brown ??