Once again Charlotte's "Famed" Epicenter is the scene of mayhem and death. 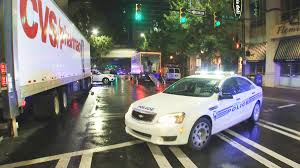 Sources tell CP that around 2:30 am CMPD Officers responded to a call regarding a disturbance and possible armed robbery in progress. 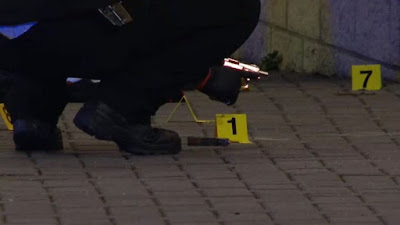 During their response the Officers encountered two suspects firing guns at each other with at least one of the suspects already hit by a bullet or shrapnel. CMPD Officers ordered the suspects to drop their weapons and when the one suspect did not comply Officers fired hitting the suspect who fell motionless to the pavement.

It is unclear if the second victim was shot by the decesed suspect or injured some other way. Witnesses say the suspect turned and fired at the officers while fleeing the scene.At least a 10 shots were fired but witnesses say they heard more than a dozen shots in rapid succession.

According to one news report there were dozens of yellow markers on the street including one for a weapon. 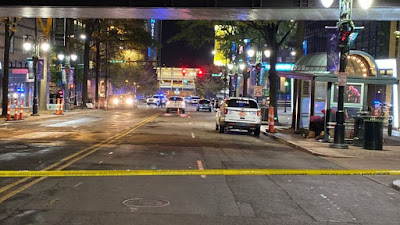 CP Update: CMPD has Officer Kevin Lovell and Officer Shane Matthews were both working uniformed secondary employment when they responded to a shooting or disturbance in progress. Neither Officer Lovell nor Officer Matthews were injured.

Praying the suspects are white. Of course its a long shot but I can hope right?

Can't wait for LaWana Mayfield to call out the CMPD as being the KKK and Nazi racists and then a claim Kerr Putney is Uncle Tom. Then the stupid local news to broadcast one of the thug's mother's to saying "but he was a good boy" sob sob sob. Such crap!

Epicenter is a cesspool of crime. Charlotte City Council needs to force the owners to either hire a dozen off duty CMPD Officers or force the venue to shut down before midnight every day of the week. I don't care what CMPD says about Uptown being safe it in NOT!

motherfucker from the other cedar post thread said nothing is happening. go do your job and stop these shootings then.

I can't read this about Uptown Trade and Tryon without wondering about Charlie Walker. I think he'd been shocked at how CMPD wants their Officers to "respect" thugs and ghetto rats. I'm sure he'd say that's why uptown has become an epicenter of crime.

This is the same crap from when the BoA off-duty cops did nothing about that black guy in the street calling them out. He called out the short brunette and white dude with a fade. They think they can do whatever they want around uptown and the cops don't stand up and be cops. I'm surprised that the cops even showed up and used their guns. Good job on that note.

Good Job CMPD Officers one less thug on the streets. Once less POS shucking in air and taking up space. I worked at Epicenter through 2015 thankful I was able to have a fun job in college but a certain clientele hurt business several bars have closed since then and unless CMPD and management do something that clientele will take over the place and people will stay away.

Charlotte history is repeating its self. Downtown was the violent crime capital in the 80’s and 90’s. After 5 O’clock, it was a ghost town. All the effort Hugh McColl did is all for nothing now. What a shame. Great job city “leaders”! Your 8 square block “tourist attraction” has become the O.K. Corral. O.K. As in, it’s okay it’s happening. You will do nothing to fix it. Wait until a round or two bounces off the government center windows.

I'm still holding out hope they were white guys. Tell me I'm crazy?

Well so much for your "holding out hope" 1:32 as expected the usual suspects.

Look no further than the piss poor leadership. As long as the brass have their efforts focused on things that don't really matter and disqualify good men and women from becoming police officers because they're not "diverse" enough. Putney, Graugh, Foster... listen up.. the media and the tax payers are going to place the blame squarely on YOU. How short are we now? 300 officers?! great job guys... keep up the good work.

I'm sorry folks but I have to say" you can't stop stupid"!!
With this being said I will say this," you sure as hell can deter some of it!!
With the establishment of the EDU several years ago, Officers who were lead by Sgt Powell; we're given instruction to meet with Bar/Restaurant owners/operators to establishment a rapport with them and advise them that we will not put up with any illegal activities in or around their facilities!!
Officers quickly gained respect from the proprietary staff, and issues were quickly resolved.
These Officers were diligent in their assignment and often worked various hours, depending on the complaint at hand.
Officers rode bikes, walked, and often worked UC!! Nobody knew when and where they were on any given night!
The actions and dedication of the original EDU members were noticed by Command Staff as well as City leaders. All this was accomplished under the command of Powell.
Powell was placed on active orders by the Military and the EDU was left without a supervisor! The unit maintained its success and endless endurance without direct supervision. This went on for well over a year and the fine Command staff( Capt.no backbone Estes) decided to bring in another Sgt from out of district( because no Sgt in District wanted the job do to the work and hours worked)!!
Thus, Sgt Sean Crooks landed in the supervisory role of the already established unit.
I believe this was the fall of a great unit. His lack of leadership( from what I understand) along with the lack of policing skills lead to the decline of a well functioning unit.
To get to my point from the onset, put officers where they are needed and let them work.
Assign bike officers( if they are not hiding somewhere) to aggressively patrol these Hot Spot areas.
Just being visible is a deterrent, to some!
I'm not by any means saying this will stop the violent crime in and around the core of the City, but it's a start..
God bless the men an women in BLUE! Please stay safe and remember; y'all do make a difference to many!!

I assume EDU means entertainment unit. That group was a fucking joke and stood at Epicenter talking to chicks all night. They had that fat guy that thought he was hot shit,too. Don't disrespect Crooks.

Serious issues going on in uptown and several weeks ago Councilman Bakari stops and talks to some firefighters that respond to the Epicentre. They are honest with him about a good bit and morale in the fd too. Last night the Fire Chief shows up to ride along at that station. Coincidence? Talk about a chain of command issue. We think we got issues.

So once again answering 911 calls is not a priority. Today divisions are having to go below minimum staffing to get full staffing at the Panthers game and the Christmas Show. How about we put responsibility where it belongs- on the event people! They will either work with a loss or be forced to raise their pay rates.

930 stop using logic. This city is run by pussies like Estes.

Special Events are a joke. Patrol gets pulled constantly for ball games and races because they can't fill them and it leaves us understaffed and overworked. Patrol gets left with 5 to a shift because the dept doesn't have the balls to tell employers that they need to keep increasing the rate until the jobs are filled or if they simply can't fill them they need to postpone and move the event! Currently, if they don't fill the TAXPAYERS are on the hook!!

Officers are FLEEING out the door and the academy can't fill classes. Maybe the new Major/Capt at the academy can un-fuck recruiting, but I'm not holding my breath!

Not a recruiting problem. Morale problem. Even the ones we hire we can't keep. Police applications are down countrywide. Even the department's that have good morale.

Does the city need more Spotshoters to tell when/where all the Epicenter gunfire is coming from? Or is it safe to say, just stay far, far away from Uptown after the dinner crowd leaves, until the next workday.