If you happened to notice Charlotte Mayor's silence on violent crime and just couldn't figure out the reason, here's your answer.

In the middle of the Thanksgiving Holiday her Honor "swooned" over Congresswoman Ayanna Pressley. The Massachusetts representative was apparently in Charlotte visiting family, when Vi Lyles nearly wet her pants. 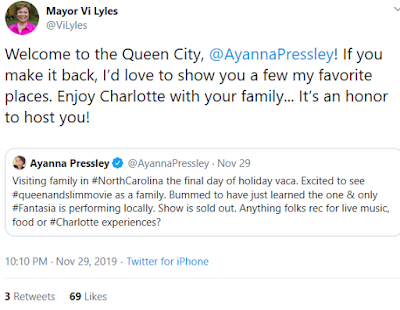 Pressley is an over the top nutbird liberal who uses her elected position to push a social agenda that is built on the belief that our justice system is entirely racist. Her proposals run from voting rights for prisoners, to banning the death penalty, to freeing thousands of inmates.

Getting tough on violent crime and repeat violent offenders would mean being diametrically opposed to the thinking of Ayanna Pressley, something Mayor Lyles is apparently unwilling to do even in the wake of more than 100 violent deaths in the Queen City.

Titled the “the People’s Justice Guarantee,” the resolution is a progressive vision of justice that is being touted as “the most progressive and comprehensive plan for overhauling the criminal legal system by a member of Congress,” according to a press release. On top of dozens of legislative proposals, Pressley’s resolution looks to undo decades of policies that have created a mass incarceration crisis.

“The criminal legal system is racist, xenophobic, rogue, and fundamentally flawed beyond reform,” the congresswoman told reporters on a Wednesday call. “It must be dismantled and radically transformed through a large-scale decarceration effort.”

With nearly a quarter of all the world’s prisoners housed in American jails and prisons, Pressley’s resolution also aims to reframe how we think about the country’s criminal justice system. As the Appeal’s Kira Lerner observes, the People’s Justice Guarantee could “redefine the national debate on criminal justice in the same ways the Green New Deal is intended to shape discussion of climate change.”

The ambitious proposal calls for a systemic overhaul of nearly every aspect of our current prison system, from policing to prosecution to sentencing. It would repeal the Violent Crime Control and Law Enforcement Act of 1994, as well as policies instilled during America’s failed “War on Drugs.” Police departments would be demilitarized and the death penalty would be abolished, as would life sentences without parole.

Consensual sex work and low-level offenses like loitering would be decriminalized, and access to restorative justice and diversion programs would be expanded—making rehabilitation and community service programs the default for petty, victimless crimes.

Working in tandem, these reforms would make prison sentences applicable only to crimes committed with an intent to cause harm.

The way jails and prisons operate would also be transformed.

Pressley’s resolution calls for an end to solitary confinement—which has been deemed “torture” by prison experts and psychologists—and would expand educational and vocational opportunities, including Pell Grants. Forced labor would also be abolished.

Among the most striking and transformative proposals in Pressley’s sweeping criminal justice package is restoring voting rights to the incarcerated—a move that would transform voting districts throughout the country. The resolution also emphasizes a “just transition” for the formerly incarcerated, removing employment and housing restrictions for those re-entering society, and granting access to education assistance. Permeating these proposals is an insistence on the humanity of those incarcerated—that they deserve a political voice, and that it is a moral imperative to help them readjust to life outside prison. That this approach feels novel speaks to how profoundly the incarcerated have been marginalized.

Pressley said the resolution was crafted with the help of 20 grassroots organizations and people directly impacted by the prison system—a group that includes Pressley herself. “For me, this is personal,” Pressley told reporters. “Like the one in four children in my district with a parent behind bars, I grew up with a parent in and out of the legal system.”

The People’s Justice Guarantee has so far racked up a number of endorsements from prominent civil rights groups, including the American Civil Liberties Union, Color of Change, UndocuBlack, URGE: Unite for Reproductive and Gender Equity, and the National Immigrant Justice Center.

Pressley stressed that it was the country’s “moral obligation” to reform the criminal justice system.

“When we sentence any person, that is a shared sentence with their families and their communities,” she said. “We must look beyond the worst thing we’ve ever done and center their humanity. That’s how we get to freedom. That’s how we achieve safety. That’s how we guarantee justice.”
Posted by Chip Starr at 1:31 PM

I voted for Vi Lyles both times never liked McCory or Foxx but was convinced Lyles would be a good leader. I was wrong she is worthless and is void of any leadership skills. Even if she agreed totally with representative Pressley her silence is an embarrassment to me and all of Charlotte.

Cant go talkin bout crime in the context of race! She knows it is better to keep her pie hole shut and just keep talking about the book club socials so as not to piss off the voter base. Even the black folks know that you don't go talkin about these things. They would much rather leave it to whitey to piss off the masses and then point the racist finger. Takes the heat off of them....

come on Mayor, strap her in Kevlar and take her to the epicenter after dark...it will be a hoot!!!

Come on guys, this is what Law Enforcement calls Job Security. The Military needs wars to fight and Law Enforcement needs stupid motherfuckers to pay our bills. Always tell the repeat Offender,in the back of your patrol car,thank you for doing stupid shit. They help Judges, Attorney's, Court Services, Sheriff Deputies, the guys who work on your patrol cars, and all the employees in the LEC. Oh yeah people who are put in Office and Media turds. A 30 year State Pension will be the end pay out. Getting a check at the end of the month is really nice.

30 year pension! You dumb asses will die before you turn 60.

already have collected 5 years, keep paying your taxes on time. Oh yeah, you will never see a pension. Haha