Another shooting of a child in this case two and the man with the gun another career thug. 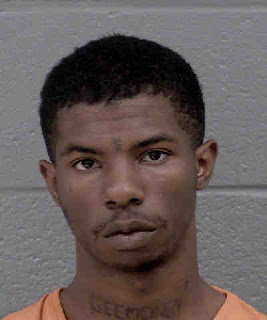 20 year old Jatarius Quanya Jones, age 20, was on Charlotte's East Side around 5:45 Monday when he decided to bang off a dozen rounds for no apparent reason at the Sharon Pointe Apartments. Those rounds scattered about the apartment complex, striking a couple of apartments and two small children one age 11 and the other only 5. They where both shot while playing with their pet bunny just outside on a balcony.

The 11 year old remains hospitalized, his condition unknown but he injuries were said to be life threatening.

A little less than two hours later along West Sugar Creek and North Tryon Street "Little G" as he's known on the street shoots at a car narrowly missing three occupants. CMPD spotted the shooter's car and gave chase. A few miles later the driver crashed on Barringer Drive and the suspects including Jones were cuffed and stuffed.

Jones who began his life of adult crime at age 16 has steadily progressed to ever more violent crimes.

Jones aka "Little G" was arrested back in May of  2019  for AWDWIKISI but even before that he was arrested for attempted murder in February of 2019.

Each time DA Spencer Merriweather and the liberal judges of Mecklenburg County let this POS out of jail. This is NUTZ!

The justice system is broken and not the way the liberals what you to believe.

Jatarius Jones aka "Little G" is a career violent felon who should never see life outside of a cage.

Considering he committed these attacks while wearing an EDM (ankle monitor) not only is he a violent thug he's also stupid beyond comprehension. That alone should earn a set of "boxcar'd" sentences.

Cmon Cedar, give hood rat G a chance, he’s probably a family man, trying to turn his life around and goes to church every Sunday. Oh wait, that’s what would have been said about him should he have been shot and killed by police during one of his violent episodes.

I find this hard to believe. I mean a man named Jatarius Quanya Jones charged with a gun crime?! I mean if you listen to how his name rolls off the tongue he sounds like a college bound well educated man. This has got to be fake news. Say it isn’t so Cedar.

And Core 4 is suppose to help combat this? It’s time to call it Core 5, 5 cited.

Know what else is funny?

The city was set to cash a 50mil dollar paycheck off the backs of CMPD for the RNC. Trump was too smart and canceled the event. The city recieved 150k.

They lost 49.8 million dollars because of COVID precautions.

Dude. Check out Louisville. If this ain’t your cue to jump ship guys I don’t know what is. That could be any one of you!

911 Response Times are 2 hours for a robbery. This is a wild west town.

no one respects us anymore, the more I look at how much I can make working corp security it doesn't make sense to stay. F*** carrying a gun and badge.. I am out this MoFo

Corp Security is worthless. Look at the guys around uptown. They are not allowed to intervene in crime, just speak and assist with removal.

I agree with 4:38. I worked Gaston County PD for 11 years. I could care less about intervening with crime. They’re just gonna get a slap on the wrist anyway. By the way, just got done watching the news on channel 9 and saw this Captain Hulsey... what’s her story? Single? Dyke? She looks like she might be fun. Anyone got the info on her?

You sick motherfuckers are in to anything. Foster, Hulsey, whomever..

Hulsey is a nice looking woman

I watch a lot of History and Science Channel. They constantly have shows about how towns have been abandoned all over the world. These towns and communities all have several things in common.

They started out with some sort or resource to support the workers in the community. They had lawlessness do to no law enforcement or a corrupt law enforcement agency running things. Or there was a civil uprising due to lack of leadership from the government.

I truly am concerned about you guys still on the job with CMPD. It has been said hundreds of times on here before, watch your six and don't work yourself into trouble.

Well said. I am also concerned about the officers at CMPD because of the lack of logic that CMPD uses.

You could be an Allstar one year and be a fall guy the next year. The world needs plenty of bartenders..

Not the hire backs at the airport. Don’t nothing happen out there

Show up, work your 8, don’t enforce anything and go home. The chief said he doesn’t want officers to be proactive on anything except violent crime. If someone isn’t committing a violent crime let everything else slide. Stay in your hidey holes and watch out for yourselves. F policing.

What I find ironic is the chief said in his video chat with the department (that no one participated in) is that officers should let small time crimes like simple possession and pdp go and not enforce those laws so the thugs can have a chance at getting employment etc. BUT the department is handing out 80 hour non-paid suspensions if u slip out a curse word at a piece of shit not complying. The chief should apply the same logic to the punishing of officers

80 hours???? Please tell me you appealed that!! are we talking you cussed someone out or just let one slip? There’s a difference

@9.15 yesterday on W Blvd saw a nugget all over the road facetiming with no seatbelt, CMPD right behind him. The nugget finally noticed CMPD at Donald Ross Rd stoplight and slowly slipped phone into pocket and did best to put on seatbelt unnoticed. Nugget turned left on Dr. Carver and CMPD just motored on straight headed for a hidey hole.

That is a perfect example of what to do! In today's world that is referred to as career survival...