No Bail for Thugs in Rock Hill

And Then There's This:
Rock Hill Herald Feb. 17—ROCK HILL, S.C. — Rock Hill, SC
A pair of Rock Hill teens are charged with the shooting deaths of two Rock Hill friends in January in an execution-style ambush that happened because one of the victims had "snitched" to police on another case, police said in court Wednesday. 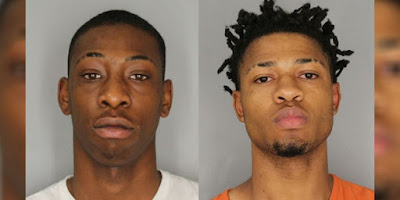 Jon'Tarius Delmone Reid, 18, and Kelvin Barnette Jr., 18, each are charged with two counts of murder, according to police and court documents and Lt. Michael Chavis of the Rock Hill Police Department.

The victims were identified as Zyon Minton, 17, and Digarian Foster, 18. They died at Piedmont Medical Center after being shot around 7 p.m. Jan. 23, police and York County coroner officials said.

Minton and Foster were in a yard on Byars Street near Friedheim Road southeast of downtown Rock Hill when they were shot.

In court Wednesday afternoon, Rock Hill police Detective Robert Smith said Foster and Minton were shot several times each in an ambush by the suspects who had been friends with the victims and had known them for years.

"The defendants were involved in a conspiracy to execute them at close range," Smith told Rock Hill City Court Judge Jane Modla in the first court appearance for both suspects. "They (victims) were ambushed and killed in cold blood. No arguments, no fighting."

Foster and Minton were outside Foster's home Jan. 23 warming themselves by a fire when they were attacked, Smith said in court.

Smith said Foster, one of the victims, had talked to police in May 2020 in an ongoing investigation. Word spread that Foster had assisted police, Smith said in court.

The suspects found out about Foster's cooperation with police, Smith said in court. Smith said there is a saying on the streets that "snitches get stitches," because of threats and acts of violence against people who stand up and talk to police.

Minton, the other victim, remained friends with Foster even after some labeled Foster a snitch, Smith said in court.

Minton had met with a guidance counselor the day before he was killed, and worked on school work just hours before he died in an attempt to graduate high school, Smith said.

Clayton Adams, Foster's grandfather, said he and his grandson knew the suspects for years. The suspects were supposed to be friends with Foster, Adams said.

"These guys have come to my house with him ever since they was young," Adams said in court. "It hurt me to my heart because I know these guys. That they would do this to my grandson. You see that in the movies. ... God forgive me, but I cannot forgive and I will not forgive."

Keia Gordon, mother of the other victim, Zyon Minton, said in court her life and her son's life were destroyed. Gordon said she will not rest until there is justice for her son.

"The question I have today is why?" Gordon said in court. "I want justice. ... Something so small, so petty. My child was going to graduate across that stage."

Reid, one of the suspects, had been in the York County Jail since Feb. 10 on other charges including illegal possession of a handgun and violation of probation from a previous conviction, York County court records show.

Reid said nothing in court Wednesday about the allegations of an execution-style killing. Reid was assigned a public defender to represent him.

Barnette was arrested Tuesday, police said. Barnette did not say anything in court Wednesday except to say he would hire a private lawyer to defend him.

The suspects face a minimum of 60 years to life in prison if convicted of both killings.

Under South Carolina law, suspects in an incident where more than one person is killed could face a death penalty trial. A case involving multiple victims is considered to have aggravating factors for prosecutors to consider when seeking capital punishment, state law shows.

Modla, the Rock Hill judge, denied bond for Reid and Barnette. Both suspects will await trial in the York County Jail, Modla said in court.

Killings were two of three deaths within hours

The killings of Minton and Foster were not the only shooting deaths in the area on Jan. 23. A South Carolina teen rapper named Paul Harts, 19, who went by the stage name 18veno, was killed nearby on the same night.

About two hours after the teens were gunned down, Harts was killed after a shootout inside a car on McShea Drive in York County just outside the Rock Hill city limits. A Fairfield County teen is charged with manslaughter and a Rock Hill man is charged with murder and drug charges in that case.

Police and sheriff's office officials have not linked the two homicide cases.

The late January shootouts in both sets of killings prompted a public stop the violence vigil that was held Jan. 26 in downtown Rock Hill.

Cedar's Take: Rock Hill crime gets limited coverage from Charlotte Media for some reason. But ask anyone south of Carowinds and they will tell you its just Charlotte thugs trying to move into York County. Only difference is York County Courts and Law Enforcement doesn't mess around.
Posted by Cedar Posts at 6:50 AM

They dont play down south of the border. The clear message to the thugs is stay your ass in Charlotte.

If it would have happened here they would have been welcomed with open arms and offered the ability to re-offend! Why isn't BLM protesting that? This isn't white cop black suspect, it's black on black crime that goes on and on!

I’m content to let the shitheads wipe themselves out. No love lost there. 90% of the homicides we got the victim was at one time an offender so good riddance! I hate it when the innocent get killed. The less animals we got running around the safer our city will be. Put that on your re-election bumper sticker Vi Worthless mayor

Is McGarity still on light duty? I wonder if he has a new pair of flip-flops to wear to work?

Who cares about Mcgarity? I want to know about the pledge fund!

I care about Mcgarity. What's going on in the homicide unit these days? Did they fire the ones that put an innoncent man in jail for murder without any evidence?

I got my pledge fund, bitches!

8:00 AM...They should have fired Mcgarity a long time ago! They had several chances. That's fucked up!

Sgt. McIlwaine was one of the best IA Sergeants they had! The Sergeants in IA now are clueless because they have no real experience as officers.

Sgt Gibbs worked in Metro for years and she grew up in Columbus Circle. You probably grew up in Waxhaw playing tennis with Chads.

The only thing that comes to mind:

"I've sentenced boys younger than those to the gas chamber. Didn't want to do it. I felt I owned it to them.

Worked in Metro for years? Yeah, like 2 years and avoided every hot call she could spending hours on DV and SC CFS. Then she went back for a couple years as a Sgt and was even worse. You clearly never had the privilege to actually work with her. Maybe spending a couple years in Metro milking calls is enough to get a detective spot, but we all know why the rule of 5 was used to get her promoted to Sgt.

Ive heard good things about her as a sgt and officer. You also forget that she fucking lived in Metro her entire life. Thats like living in Compton.

If you gonna say something about her, you could say the same thing about so many sgts that did nothing and get promoted. honestly, thats most of them. Bryley was a school security guard and couldnt even speak to officers when she got promoted into North. Chickeree and Barry were test administers. Myers was myers and we all know how that is around the LEC. The list goes on and on. People dont want to be Rambo or Seal Team 6 anymore due to city politics and nice gigs doing nothing.

I sit in myer park and i love it. its a tuff job so i just make the most of the hand that i was dealt in life.

I have no doubt that she is a nice person but just because you lived or grew up in a certain area doesn't automatically qualify you as a sergeant. Remember, you can get hired as chief without a college degree!