Ashton Kutcher Back in the USSR

Unless you are over 40 you have no idea how odd it is that Ashton Kutcher is sending out Tweets and a Twitter pic from "Red Square" this morning. 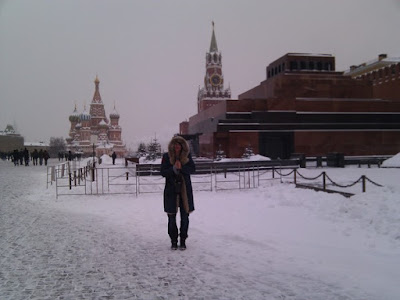 Fear of the the evil empire once known as the Union of Soviet Socialist Republics (USSR) cost the western world untold billions of dollars during the years of what was once called the cold war, with Russia.

Kutcher @aplusk has been on a international good will mission to expand the use of technology to the land of cold winters and straight up vodka.

The actor and founder of Katalyst has been tweeting to his 4.5 million plus followers for nearly a week, with several live feeds via ustream.tv and dozens of "oh wow" photos.

Kutcher was recruited by the State Department to join a delegation including eBay CEO John Donahoe, Twitter and Square founder Jack Dorsey, and Cisco CTO Padmasree Warrior. The idea behind the trip is to discuss how communication technologies and social media can be used to strengthen and broaden the ties between the United States and Russia.

It remains to be seen if anyone, particularly the un-trusting Russians will take Kutcher seriously, but he has my attention. Plus he has more twitter followers than the Pope.
Posted by Cedar Posts at 10:21 AM