The embattled Chief of Charlotte's police department was recently interviewed by WCNC Television's Sonja Gantt. The interview is expected to air during the 6 PM newscast on Monday. But don't get too excited, Cedar Posts has learned that all of the soft ball questions by Gantt were submitted to Monroe well in advance of the sit down. 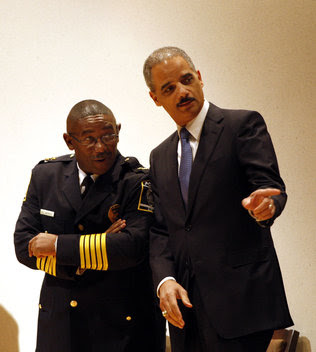 WCNC Channel 36 tells CP that they will indeed be showing the entire interview on Monday during the 6 PM newscast.

Also don't expect the embattled chief to answer any questions about his role in the Marcus Jackson case.

CMPD sources say that WCNC's participation in the "I've Made Changes" infomercial amounts to the once functioning news department becoming to nothing more than enabler to Monroe's sad attempt to save his crumbling empire. I really hope they are wrong and that Gantt goes after the Chief without reservation.
Posted by Cedar Posts at 11:51 AM

It's not gonna happen, this will be much like Tiger's carefully orchestrated press conference, aided and abetted by Sonja Gantt.

They will try to make him look all warm and fuzzy and comfy and cozy, photos of family in his redone office, how he cares about his officers, how he has changed so many things, how he has saved money for cmpd........none of it honest or true. Simply part of the media offensive to save his shattered reputation.

I am just sad that a so called media outlet is participating.....this is not NEWS coverage, it's show biz, folks.

Yes, I heard that any news station that had done ANY negative(read TRUE) stories on rodney are now "news non grata" with Tufano and the Gang.

This will just be a bandaid for romo, the genie is already out of the bottle.

His control has slipped, and it's killing him, he can't bully ALL the news outlets, or threaten them with cutting them out of the CMPD loop....that ship has sailed.

But on a serious note, is ANYONE ever going to "really" do anything about this guy? How much longer do our officers have to be beaten down and disgraced by him, and the citizens be lied to?

I KNOW many officers are worn out and sick of this, God bless those who can hang in there till he is gone! WE NEED THE OLD TIMERS ON CMPD NOW MORE THAN EVER! Because the younger ones are going to have to be deprogrammed and shown how a "real" PD is run!

All this is doing is helping to put the steam back in Romo's sails. Things are blowing over and everyone is taking poor Rodney under their wing and feeling sorry for all that HE'S had to endure. So, all the sympathy is going to continue to mount for Romo and everyone is going to forget every possible involvement he's had in the Marcus Jackson fiaso and all the damage he's done to CMPD. It's all over folks...disaster averted by king rodney.

All that is necessary for the triumph of evil is that good men do nothing.
Edmund Burke
Irish orator, philosopher, & politician (1729 - 1797)

The answer is no. no one is going to do anything. not the city. not the state. not the mainstream media.

20/20 etc. may be willing but if you want help, for that matter, the new york times would probably be more likely than our own local media. sad, but true.

now, if people were to campaign heavily for the replacement cheif, the media would be forced to pick that up because citizens would want to know why, but the only possible way is to think outside the box.

Don't kid yourselves, people are not going to forget about what he has done and how he has lied.

Especially not the SBI or the FBI.

This pathetic "interview" is just that, a pathetic attempt to garner sympathy and show his "human" side.

People do not change, especially when they can never admit they are wrong, or never take responsibility for the crap they have done. Tigers don't change their stripes. Rodney is the same old rodney, it's just an attempt to make him seem like a victim.

CMPD is the victim in the rodney, ray/ray regime.

And people will not ever forget how he has destroyed the CMPD.

He has NO CREDIBILITY, NO RESPECT.

His "legacy" will be one of disgrace, no matter how hard he tries to rebuild his reputation, it's impossible.

He started out lying to get the job, and is continuing to lie to try to keep his job.

He and Curt Walton, are two peas in a little tiny pod.

People aren't buying what they are selling any more.

People are aware of what is going on and what has gone on.

I needed a good reason to turn off WCNC now I have one! They were never about "digging" for a story anyway. I say we don't even bother watching this crap! We need REAL Investigative reporting in this city!! There is no real reporters out there anymore....the kind that goes out without bias and digs for the truth no matter what the answer...not the kind of "show" that will be on tonight....all this information about CMPD and not one good investigative reporter out there willing to find out the truth. Really sad.

Well, there you go, the interview with rodney:

He really said nothing of any substance.....he is just AWFUL in any interview.

All he could say about his NEW PROCEDURES he has supposedly initiated at the academy was: we are having more face to face interviews with background checks.
HUH?

Not ONE question about Marcus Jackson and the memos or anything else concerning that.

And once again, he LIED about reporting crimes differently and not manipulating the numbers.

When it all comes out, and it will, all of these so called "interviews" will surely be used against him.

What a farce....I will not watch WCNC EVER AGAIN. And I hope others follow suit.

It was obviously such a prearranged pr op, pathetic.

Lisa Miller and another reporter at WFAE are responsible for getting and
making public the MEMOS from IA confirming what we knew, that rodney was not being truthful about Marcus Jackson and what he knew.

WFAE just doesn't have the following of "mainstream" media.

But these two have been digging away, and I believe they won't stop until they uncover everything.