While politicians celebrate Michael Jordan's purchase of the Charlotte Bobcats, Cedar Posts is standing back and asking is this really good news? 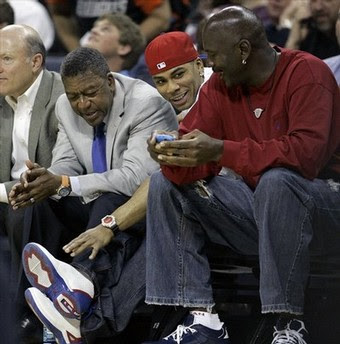 Charlotte City Council members were quick to put a positive spin on Jordan's purchase of the Bobcats. David Howard via twitter and linking the Charlotte Observer's front page story, adding "Great News for Charlotte" and Andy Dulin's reaction was to announce that "The City's contract with the franchise is ROCK SOLID".

I have learned over the years that the first sign of trouble in a marriage is when one or more of the parties publicly announce that things have never been better.

Which is often followed by a request for prayers and privacy during a difficult time. Make no mistake about it things are not as good as some people would like you to think.

After years of lack luster attendance for a team that rarely gained even local attention the Bobcats are suddenly looking at a shot in the NBA playoffs. But things have to be pretty bad for an owner to sell when his team finally has a chance in the post season.

Attendance is still an issue even with a better playing team, and the Bobcats image has never taken flight with Charlotte. Bob's Cats have a low budget "hip hop" and gangster image that will be hard to break. The cable box with its dark and cave like corridors combined with the rather uneasy feel has never appealed to Charlotte's middle class families.

The Bobcat fan base was created by giving away free tickets to Charlotte's under privileged youth which gave the family affordable seats the decorum of a public high school cafeteria. Even the pricey lower lever seats are tight and uncomfortable and require a vast amount of dexterity to negotiate the mass of television cables that crisscross the floor.

In order for MJ's purchase to be good news for Charlotte the team will need an extreme makeover and that will require money, a lot of money. So don't be surprised that when it comes time for the "big reveal" and the crowd chants "Move that Bus" that we find ourselves waving goodbye as the team bus rolls out of town.

The only thing that will save the Bobcat's is money. Money that Michael Jordan may find hard to come by, unless Charlotte's taxpayers are again put on the hook.

In that case Cedar Posts will offer prayers but forget about privacy.
Posted by Cedar Posts at 6:45 AM

Right on Cedar this can only be bad news. Jordan for all his talent has not one once of biz skill. This is a death blow for the NBA operation in Charlotte.

Cedar the Bobcats aren't going anywhere the is superfly's home town now. Lighten up some, not everyone is on the take here in Charlotte.

Anything is better than Bob Johnson!

Michael Jordan will be taking his "bobcats" and hitting the road, just wait for it.

Bob Johnson came in with a bang and leaves with a whimper.

Times are tough, don't you know?

Too much stuff going on in the world today to be concerned whether the Bobcats go or stay.

I'm glad Johnson is gone but the Bobcats are not just bad as a team but bad as entertainment and whole thing sucks and always has.

But Cedar you don't help. How about a little positive?

I doubt Jordan will save the Bobcat's it will need a serious makeover.

Anon 6:45 PM
In jail would be my first vote or any city OTHER than Charlotte :-)

Didn't Johnson have some ma$$ive contractural penalty in the event he moved the team? Does that now apply to Jordan? If not, we may be sorry.