Monday found Charlotte news media including WFAE's Lisa Miller scrambling to catch up with the Ballantyne rezoning story. Late in the afternoon the Charlotte Housing Authority issued a statement saying they would not participate in development of affordable housing in Ballantyne. Then less than two hours later news media descended on a South Charlotte church for a community meeting.

According to Jennifer Gallman a Housing Authority spokesperson the number of units proposed, and cost of land are factors in the decision not to pursue affordable housing in Ballantyne. 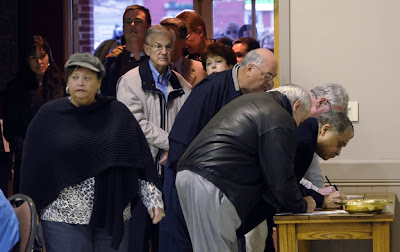 As neighbors arrived at the Harrison United Methodist Church, Republic Development Group Director Stuart Proffitt told WBTV News that the deal was still on and that they are still seeking the rezoning. “They (CHA) are walking away from the project,” said Stuart Proffitt. “We’re still moving forward.”

During the two hour meeting which you can watch in its entirety here, Proffitt was confronted by a church full of unhappy homeowners. The kind of group that 100 years ago would have carried pitchforks and torches. 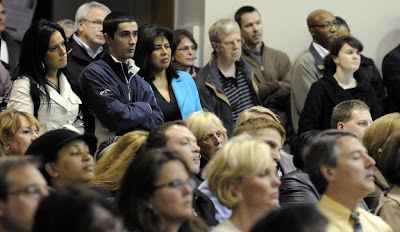 Homeowners raised objections to the planned low income apartments, saying they would add to school crowding and traffic congestion. Without bus lines or sidewalks many voiced concerns about the lack of common sense they saw from the developers.

Others pointed out that it was unfair for outsiders to draw conclusions about an affluent area resisting an affordable housing project.

“This is not about people, race, gender, equality or anything like that,” said Kevin Williams from the Scott Hills community said. The real issue, he said, is that the location is not suited for multi-family use.

The resistance has surprised both City Council and the Charlotte Housing Authority. Even Stuart Proffitt and his partner John Schwaller seemed to be unprepared for the onslaught of public criticism.

Surprisingly the sharp dressed and noticeably arrogant Proffitt didn't earn any points with well heeled Ballantyne crowd. It was clear from the start of the meeting that Proffitt was on the defensive as many of his key points were met with skeptical and mocking laughter. 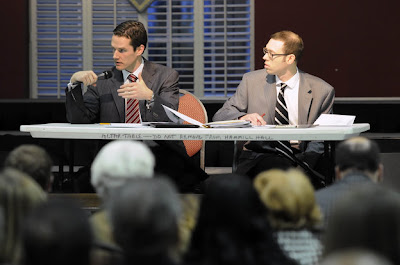 The highlight of the evening came when Ballantyne resident John Freudenthal began to ask a question of Republic Development Group Director John Schwaller and knocked over both the full color site plan and elevation drawings. 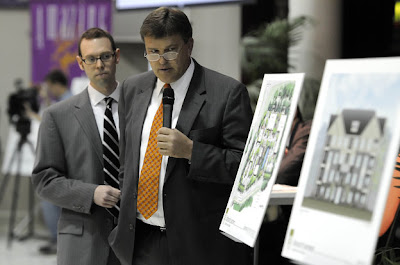 Interesting side note Freudenthal who took over as an impromptu emcee is in the commercial construction business, and may see a benefit if the residential zoning change is denied.

Defeated and rejected Proffitt spent the last half of the meeting sitting behind a table, reminding those gathered that the church had to get ready for a consignment sale in the morning.

Council Member Warren Cooksey sat in the back for most of the meeting saying nothing. When he did speak he quipped "get the tomatoes ready" and then proceeded to remind everyone that he doesn't take a public position prior to a vote. This brought a groan from the audience and the next speaker who said if Cooksey didn't listen they would vote him out of office next November.

With unanimous agreement the community has demanded that the rezoning petition be denied. The property was planned as office space and that is what the community wants built on the nearly 7 acre site. Proffitt's desperation is evident, the word is that Republic has grossly over paid for the property, and with demand for office space at zero and retail businesses closing at a staggering rate, residential is the only way to go. The property at only 7 acres will not lend itself to large condos or homes.

For years Charlotte's citizens have been ignored by Charlotte City Council and Developers. Between the federal bailout of GM, AIG and Bank America, neglect from State Transportation and the Governer's Office as well as local politics run amok, Ballantyne taxpayers have had enough.

The anger and frustration that Council member Cannon spoke of is a direct result of people saying I'm mad as hell and I'm not going to take it anymore. Throughout the meeting which was web cast via ustream a church banner was visible in the background. The banner proclaimed "Go Shout It From The Mountain" and Ballantyne residents are doing just that.

Special Props to Steve at Ballantyne Scoop for streaming the meeting via ustream and extra props to Chris Miller at WBT for twittering the entire meeting in a play by play format.

Side note one of the great things about being Cedar Posts is I can go to community meetings talk with Lisa Miller, Cooksey and Patrick Cannon and not be Cedar Posts.
Posted by Cedar Posts at 4:33 AM

Thank you for the update. I had planned on going to the meeting tonight but now I can stay home and eat dinner with my family.

I just heard that too!

I FORGOT all about Sonja Gantts interview with RuttMutt...did you watch it?

Enjoyed watching the meeting live and reading the posts.

Ok. We get it, RoMo is hated here. Every post does not have to do with him.

What's wrong they quit building land in Texas? Why are these idiots here in NC, a state they know NOTHING about trying to force this down our throats and change a community without any thoughts to those who live there now! I hope they and their plans fall right on their A$$....

I was glad to see so many out there! NOW if we could just get that and MORE to our BOCC & City Council meetings! THEN they too might hear us!

Still waiting for Ric Killian and/or Ruth Samuelson to explain why they voted for the state law that Warren Cooksey says ties city council's hands with regard to such re-zonings for supposed low-income/public housing.

I'd be curious to know where Mr Profitt lives, and if he's proposed any public housing projects near his home.
Appears his group speculated wrong on a piece of property and is trying to get the taxpayers to take it off his hands.

Great blog! You and Ballantyne Scoop are the only two sources with good reporting on this issue.

I went to the meeting with an open mind and expected the developer to give a good presentation and argument. They were arrogant and did not answer any questions directly.

The developer stated they trying to find another experienced LIHTC developer to partner with them. CHA out does not mean this is over. Too much money is at stake here.

Looks like segregation is alive and well in Ballentyne. Surprise surprise, spoiled rich bigots don't want the "hired help" around.

It probably makes you feel better to say that about Ballantyne. The truth is these residents are the only ones sensitive enough to consider what life will be like for these people that are stuck in the proposed housing. THINK ABOUT IT... farther from work, higher gas prices higher grocery etc. the proposed business cannot be supported by the 80 proposed residents. the kids get off the bus and are teased by the rest of the kids. kids can be cruel. these people would be miserable here, and this location does not support their needs. sure, it might seem like a nicer area at first, but pretty quick it would be more like prison, held back from going places and doing things. And they will be put in this situation just so that someone can make money off a bad land purchase decision.

come to think of it, if that developer is smart, he will just hang onto that land until we see what happens with the gold mine in lancaster. It could turn out that he can make alot more money off that land, selling it just like it is, for who knows what.

Ballantyne residents are afraid of their own shadow. If this place had went through they would be in counseling for years. They freak out and hide behind the curtains whenever they see a car that is just average driving down the road.