At first it was funny, but like a rowdy drunk at a bar or obnoxious heckler at a baseball game the novelty of the act wears off and sooner or later you wish they would shut up, go home or just pass out. Say hello to ESPN's David Newton. 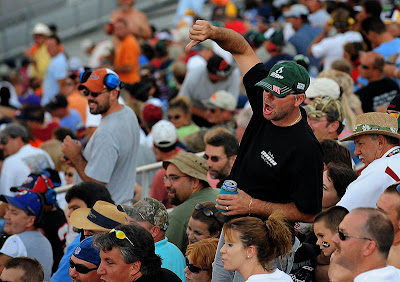 Newton follows NASCAR for ESPN and he's been hitting the twitter keyboard really hard bashing Danica Patrick ever since Daytona.

During Saturday's race 14 out of 22 tweets were some sort of crack on Danica Patrick:

@DNewtonespn: "Who has been hyped and or crashed more this week? Lindsay Vonn or Danica Patrick?"

@DNewtonespn: "Kelly Bires just said he was in Danica Patrick's shoes not long ago. Didn't know he wore four-inch stilettos."

@DNewtonespn: "That game not nearly as fruitful as the one we came up with last week where you chug every time Danica Patrick is mentioned on TV."

@DNewtonespn: "U never see other NASCAR drivers besides Danica Patrick taking a shower on commercials during a race. Don't they believe in cleanliness?"

Starting 39th Patrick had moved up into 3rd place during Saturday's Sam's Town 300. Passing Danica eventual winner Kevin Harvick put his hand out pointing to the wall with a "run up high" and "follow me" motion.

"Kevin Harvick was great actually — leading the race he was telling me to go high with him," she said. "That was cool and I was able to run up high and feel that line out. That's really cool to see that — he's leading the race and taking time to help me out. I learned for sure."

But Newton watching the in-car camera on ESPN assumed Harvick was flipping Danica off.

Eight laps after pitting for tires and fuel Patrick quickly came upon the 81 car of Michael McDowell the slowing Dodge had lost it's rear end. McDowell assumed she would go high, moved inside and they get tangled up sending both cars into the wall. 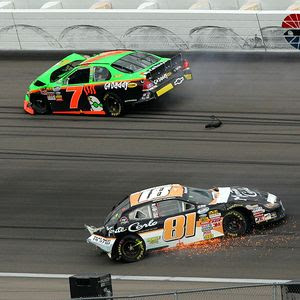 Newton after hearing Patrick on the radio blaming McDowell, immediately points to Danica:

@DNewtonespn: "It will be part of video homework. -- Danica mad at McDowell for that wreck. She may want to check a replay.

DNewtonespn: "A little kid in restaurant when Danica Patrick crashed: "Oh, it's the GoDaddy car" Now the GoHomeEarly car."

McDowell would later tell ESPN it was 100% his fault that he though she was going high on turn one.

Newton is one of a handful of Danica Bashers who find fault with just about everything she does but Newton is often the most crass and pigheaded.

In the end Danica went to the garage in 35th place, Harvick won the race and David Newton was last seen in the men's room checking his manhood for improvement, alas only shrinkage.
Posted by Cedar Posts at 8:52 PM

Never heard of him! But Danica Rocks! You go girl!

Not only Rocks, but is 100lbs of hell that I would let give me hell any-day of the week. she is one little sexy girl in that race uniform.

Some people need to just get over themselves. Danica Patrick is here and guys like Newton can suffer or move on, penis envy is not a good thing.