I'm at the point of information over load.

While I'd rather go back to the old, Tiger Woods and Two Pickled Eggs that I wrote about a couple of Master's ago, but we are now stuck with the Media Circus Tiger Woods.

Today at 11 Mr. Woods will speak and the entire nation will be watching. Tiger will say a few words, squeeze out some tears and offer up a weak mea culpa, when his statement is over the world will make a collective groan and life will go on.

In my opinion there is nothing Mr. Woods can say at this point. He has made himself out to be a fool with an awful lot of money. Should he return to the PGA tour it would only make for an insane sceptical, an absolute mess that would take away from the game with constant heckling from the gallery which will not make for a very family oriented event.

Even today's press conference isn't a press conference as the press has been limited to 3 reporters one from AP, Reuters and Bloomberg. Even the Golf Writers Association of America has boycotted the event. The rest of the media will watch via closed circuit television at a nearby Marriott.

The Charlotte Observer's Ron Green, Jr. takes an incredibly soft tone with his piece "Will The Real Tiger Please Stand Up."

But seriously is there any question that Tiger Woods could answer that wouldn't become fodder for SNL?

There is nothing Tiger Woods can add to the game of golf or to the Professional Golfers Association Tour. Tiger you are done, please sit down and shut up.

Word on the street is that Chief Monroe has recruited Sonja Gantt to spin his recent bold face lies into a necessary way of doing business. WCNC will air the complete one on one with Sonja Gantt on Monday at 6PM. Cedar Posts has learned that Monroe will make some of his most astounding claims to date including that he has saved the city of Charlotte millions of dollars.

Crime Numbers Fact or Fiction? According to WBTV's Sharon Smith:

At the same time, the caseload for Mecklenburg County Assistant District Attorneys is up. New numbers from the Administrative Office of the Courts, which tracks cases filed across the state, shows several hundred more felony cases from July 2008 through June 2009. The AOC report shows the number of burglary cases jumped by 443, larcenies by 434, but robberies went down by 129 cases filed." The entire WBTV report is here. Props to Belinda and Molly Grantham for pointing CP to this story.

So Chief Monroe claims that crime is down, but the Mecklenburg County DA's office says they are prosecuting more crimes than ever before and so crime is up. Could this be why CMPD no longer reports arrest numbers? Who to believe?

Word is the Rob Tufano and Ray Tarasovic are on their way out. More about that later.

And ..... Frisbee Football returns but this time it is off duty. WFAE's Greg Collard has the details here.

Tough course on the Women's downhill sent a hafe dozen women into the snow and made for NASCAR like television, but Lyndsey Vonn (Gold) and Julia Mancuso (Silver) survived.

The always very animated Mancuso would go on to win silver in the combined event when Vonn caught a ski tip and went down on the last leg of the course. Vonn was well on her way to second gold medal before her fall.

Shawn White makes a Double McTwist 1260 look easy and takes gold again. I and my humble Indy garb will now stay off the half pipe for the rest of the season.

Men's figure skating Evan Lysacek won gold and Johnny Weir signed a deal to be on the 3 dollar bill. 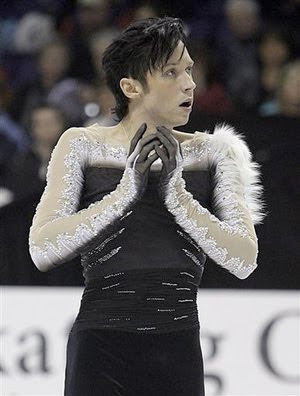 I know that's not P/C but Weir (5th) who has a name that rhymes with ??? might rethink the flamboyant Lady Gaga costumes and just skate, after all I don't expect same sex pairs skating anytime soon.

Blindfolding your 11 month old kid and making a video tape of him bouncing off the walls and tables is not a good idea. 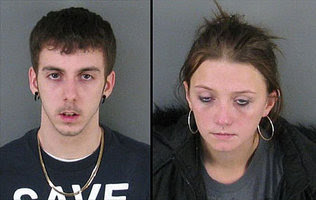 Just ask Delmer Frank James Doss and Amber Lynn Burgess of Stanly who were arrested for child abuse for just "having fun".

That's all folks!
Posted by Cedar Posts at 5:16 AM

A couple weeks of rumors on Charlotte's behind-the-scenes leadership fretting and ruminating over "what to do" about CMPD and Monroe is capped by the daughter of a former mayor giving Monroe a free platform to spin his story to a wider audience.

Could this be the start of a targeted media offensive?

Oh yea, you better believe it, the offensive clowns are gonna be out in full regalia,(Much like rodney's uniform).

Go to CMPD.org, on the front page, all the crime stats are missing.

So where are the IA REPORTS under Rodney??????

Cedar,
Come on, your homophobia is showing.
Johnny Weir had a fantastic performance, technically and artistically.

And are you really going to tell me that his costumes are any more out there than the other male skaters?
Really?

Why are straight men so threatened by gay men? Could it be latent feelings of homosexuality? Why do you care what he wears?

The man can skate, that's all that should matter.

And no one watches Sonja Gantt anyhow...I can't wait to see how her "interview" plays out. Will someone please ask her what the "restrictions" were on the interview? Totally set up PR Interview.

No homophobic person here. I just think that like Adam Lambert Wier was too worried about who he was to do the job he needed to win a gold medal.

Do I think he would have placed had he been a little less out there? YEP!

"Do I think he would have placed had he been a little less out there? YEP!"

And that right there is a shame...it's not about sound bytes, it's about ability on the ice.

And, if anything, he has made it more interesting and colorful.

Everyone is so very judgey-judgey if you're a little outre.

At least he is honest about who he is, unlike Tiger Woods.

I was watching the news last night and the segment on the graduation from the academy.

I was looking at the part where they were handing out the certificates and wondered who the new captain was that was standing by rodney and how long he had been on because I did not recognize him. And I was struck by the arrogant look he had on his face as he was handing out certificates,it just stood out.

From asking around I found out that "he" was Sherie Pearsall.

Then I listened to the explanation by the captain over the academy they were interviewing about how the screening process had "really changed"...."ah, like, we are making more phone calls and stuff".
I mean, that's not an exact quote, but clueless (close) enough.

When is this going to stop? The lies, dishonesty, cronyism, you name it folks, rodney has brought it to CMPD big time.

I hope the actual physical evidence
(IA MEMOS) are going to be enough for someone to take some action.

When is it okay for the man holding the job of LAW ENFORCEMENT OFFICER to be so totally involved in a cover up?
I would hope that blatantly lying to the department and the media/public would show once and for all what this guy is like?

Cedar,
They are promoting the heck out of the so called "interview" with Sonja Gantt, his brand new PR PERSON.

I swear, I will never watch that channel again.

I can't wait to see how he tries to spin things, and how Ms. Gantt allows him to get away with it.

You can bet your boots she had to submit questions before hand, and rodney had TOTAL CONTROL over the "interview", much like Tiger Woods.