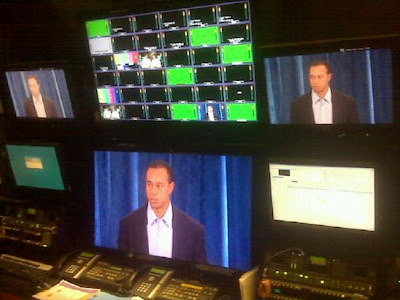 Tiger used his 15 minutes of national attention to whine about the media, give an angry sneer at the camera and keep the world guessing. The world's best golfer just wanted you to know that not only is he a total douche bag, and bad husband, but that is also the ultimate control freak who will stop at nothing or at any cost to anyone to have it his way.

He would have be so much better served had he just talked rather than read a script, a rather poor script at that. He could have gone to youtube and acompished the same thing. Even the setting was more funeral home that golf course club house.

And it didn't work. No one really is buying it, there was no sincere apology and most people are giving Tiger a big fat FAIL.

I really didn't like him bringing the kids, both his and the kids who his foundation helps into the mess.

Deep down I had hoped to hear Tiger say "I've been wrong in the way I've treated people, the fans, the women that I had relationships with and the media."

He violated the first rule of public relations, the camera is everyone and they take what you do and say very personally. The angry look didn't win any points. That is why you never shove a cameraman or put you hand up to the lens.

During the last 3 months he violated the first rule of relationships in that "Silence is the worst form of punishment". With his silence he continues to punish his fans.

So all I saw was a guy who is still angry that he got caught and he blames the media.

On the other hand one of my favorite hottie ski girls Julia Mancuso tweets:

Thanks tiger. sweet hugs to your fam, can't wait to see you back out there!! Good Luck!!

Ahhhhh some women are so cute but just so dumb and will believe anything.
Posted by Cedar Posts at 11:07 AM