A Day in the Life

It’s 3 AM and I've awoken to the Beatles "A Day in the Life" playing in my head, sadly for me most the people I know are still sleeping.

Those who might wake up at 3AM will just roll over, fluff their pillow and drift off back to sleep. But to me, one of the best things about living part time in Charleston's historic district, rather than the look alike cloned houses and silent streets of urban planned subdivisions is that my Charleston neighborhood is alive even at the small hours that follow midnight.

The city is respectfully quiet, but there is life at every turn and knowing that I have two eager friends to walk along with me, makes the choice to go for a 3 AM walk easy. They never need encouragement, their otter tails banging everything in reach, my two happy clowns who the rest of the world calls "Labs" are ready to go and the three of us bound out the door.

Thunderstorms swept through Charleston around midnight and some of the streets are still flooded something you learn to live with if you call Charleston home. 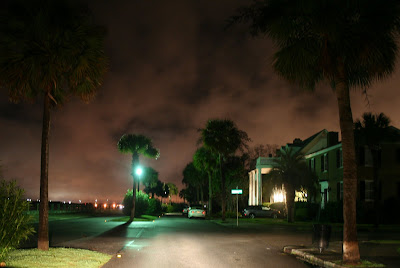 Up on Broad the Blind Tiger has closed but the staff are still cleaning up. Along the East Bay a lone patrol car sits, the officer inside completing paperwork looks up just long enough to recognize Madison and Callie, he know the dogs but doesn’t know or acknowledge me.

The section known to all as Rainbow Row is dark and void of her famous pastel colors, simply muted tones of gray and white.

Along high battery all is quiet the harbor shrouded in low hanging clouds passing swiftly out to sea. It's still and the water nearly motionless.

Charleston is a city of subtle oddities. South Battery Street is a block from The Battery the street that runs along the battery is called Murray Boulevard.

Years ago they filled in the marsh land that had grown up over the years. After all the small ships and wharfs shut down, they built a sea wall and the property became prime real-estate so with the sea pushed back, homes sprang up.

In the dark dampness of the pre dawn hours I notice a lone fisherman, his pole, cooler and bucket. A lit cigarette in his mouth, he eyes my two dogs cautiously gives a friendly wave and casts his bait the to the tide.

My grandfather taught me long ago the fishing wasn’t just about where but about when, the moon and the tides all played into catching fish and tonight at 3AM the fishing is good. But this secret was only a secret to me for scattered down the concrete edge of the Ashley River are no less than 30 cars outside each darkened car are couple of poles and buckets. These buckets are about fifty feet apart, another fifty feet and another fisherman. Some sit, some lean, some are asleep in their cars, those who came together take turns watching the pole and checking their bait.

At 3AM this is an surprising sight and in the darkness their black faces are hard to see, they are all black and they are all fishing.

Good Morning, says Trenton, he’s afraid of Madison and Callie he says “Man them two dogs are so black I didn’t even see them until you was right here. I laugh and he knows why I’m laughing. Other than the fish Trenton just put in his bucket I’m the only white person on the battery this AM and Trenton is no more easy to see than Madison.

I circle the dogs back about ten feet and tell both Madison and Callie down. They drop like Marines on a drill sergeant’s command.

Trenton asks if they are black labs and stops me from answering by adding.
"I know they black."

I polity tell him yes they are black labs

And they’ll just stay there.

They will stay as until I say OK.

He’s talking to me keeping an eye on Madison and Callie just in case they make a move.

Trenton tells me the moon is right and tides running so you fish when they are biting and proudly shows me a bucket of small fish.

Up and Down the battery the buckets are filled with the same small fish. The fishing is real good. Trenton say he's been fishing here a night for as long as he can remember, and that he used to come here with his father and his grandfather.

I learn they both have "passed" and his son's want no part of fish, or fishing.

We leave Trenton and the other fisherman behind and make out way past the Coast Guard Station in no time we are back home again.

We’ll leave Charleston alone for now. The black mass of fur has curled up into one ball each dog on top of the other. Two pairs of eyes look up at me and the tails thump the floor as if to say we'll ready to go again.

Stay I tell them and Madison lets out a big sigh.

Dawn is still mercifully 3 hours away sleep is not easy to come by with so much to do at 3AM.
Posted by Cedar Posts at 3:11 AM

Okay, Cedar, please clear this up for me!

In one Blog, you talk about being married and have photos of your wife, in another, you speak about a "relationship" with a News Anchor.

So which is it? Are you writing both, or are there different authors?

I spend a bit of time in Charleston with friends who live "South of Broad".

It is just as you describe it!

I love to visit, but could never live there full time, the summer heat and humidity are killer.

I visit in the winter!

Cedar you sure have an interesting life!

I love these your stories! Keep'em coming Cedar!