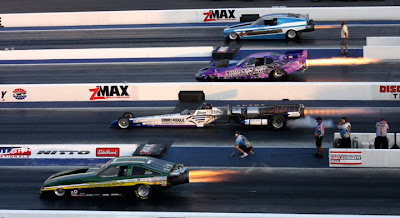 Comparing the first NHRA-sanctioning four-wide event to the circus and professional wrestling, the Professional Racers Owners Organization sent a letter this week to the NHRA saying it would no longer race for points in the four-wide format.

Of course anyone who knows drag racing knows it is the time honored one on one format that makes drag racing the attraction that it has become and always has been.

One of Bruton Smith's competitors said it best "there's an idiot born every minute".

Four Wide Drag Racing as far as Bruton Smith was concerned had to be better, twice the cars, twice the lanes, twice the horsepower. In the end it was just a gimmick. A carnival freak show. A two headed turtle, or 1000 pound women, King Kong or "zMax".

Now what? What can you do with a multi million dollar race track that lacks turns?

How about a nice airport?