Cedar Posts had the pleasure of watching CMPD Majors Diggs and Levins trying to reason with a Bon Jovi fan last Thursday Night, but the fan was having nothing to do with reason. As common sense was a no show, things got a little chunky. 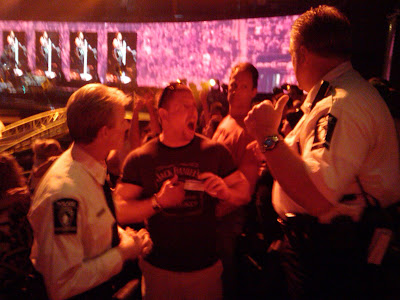 It wasn't long before "It's My Life" was wearing some bling and on his way out the door. I suspect Levins has a part time job as an umpire as well.

Cedar's Advice to drunk concert patrons flipping off security is a sure fire way to get the "You're outa here".

Randall Wattson of Raleigh is the party hardy guy in the photo so says Cedar's CMPD contacts. From what Cedar hears Wattson tried to re-enter the Cable Box and was cuffed and stuffed for the short ride down the street.

Oh and about the concert, well Cedar is not a die hard Bon Jovi fan but in support of Mrs. Cedar and the other 39 girls around me, we had kick ass seats. I swear the male/female ratio was 20 to 1. My reward U-2, Snow Patrol and STP and Cold Play in the UK this summer.
Posted by Cedar Posts at 8:32 AM

Wonder if the two majors realized they we standing next to the famous "Cedar Posts"? Oh what stories they could tell.

I thought the same thing when I saw this article a few minutes ago! LOL....

Diggs and Levins looked sharp in their white shirts. Rodney should be proud. No wonder he is $2 million over budget........

If people only knew the money that has been wasted on uniforms, ALL KINDS OF UNIFORMS, since rodney has been at CMPD.

Seems if he can't leave a legacy of "well done", he wants to leave one of
"lookin' good".