Deep Horizon What The US Government Doesn't Want You To Know 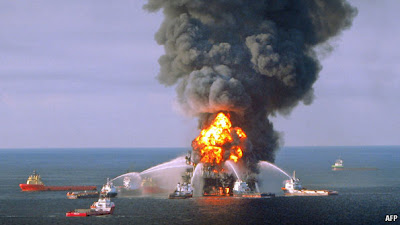 100 miles offshore a life and death struggle is taking place as the world's greatest super power stands by helpless to stop the flow of thousands of gallons of crude oil rising from the ocean floor.

There is little video footage, even less real information and a lot of unanswered questions. So how bad is it? How bad could it get?

Well, the worst case scenario might just mean the end of life on the planet as we know it. Best case, years of clean up, billions and billions spent to compensate Gulf Coast industry and billions more to compensate non-us islands and coast lines effected by what some are calling the largest man made disaster ever.

The use a chemical dispersing agents to break up the oil is claimed to be the best answer, but from what many say this is BP, PLC's way of saying what oil? The effects on the environment are unknown, but it can't be good.

There is a very detailed look at the Deep Horizon operation from Pure Energy System's Web Site:

First, the BP platform was drilling for what they call deep oil. They go out where the ocean is about 5,000 feet deep and drill another 30,000 feet into the crust of the earth. This it right on the edge of what human technology can do. Well, this time they hit a pocket of oil at such high pressure that it burst all of their safety valves all the way up to the drilling rig and then caused the rig to explode and sink. Take a moment to grasp the import of that. The pressure behind this oil is so high that it destroyed the maximum effort of human science to contain it.

The rest of the story is here, but in short the web site says we are toast, the gulf coast will not recover fully for 10 years and fuel prices are heading skyward.

What the Obama administration is not telling you is that they looked the other way as far as safety regulations went in an effort to help spur the development this massive oil and natural gas deposit known as Deep Horizon.

The Obama administration's plan to use Deep Horizon as a bench mark to promote releasing dozens of east coast drilling permits and pushing the President's agenda has back fired in the most stunning way.

Cedar Posts Takeaway: Obama, Bush, Clinton, Regan all have weighed the risks of oil and gas production, exploration, and distribution against that of growing the economy, and all have supported "big oil" leaving the rest of us at the mercy of these giant corporations be it our world our health or our bank account.
Posted by Cedar Posts at 7:25 PM

Actually the rule exemption you're referring to occurred during the Bush Administration. See:
http://www.dailykos.com/storyonly/2010/5/6/864209/-2008-rule-change-exempted-BP-from-filing-blowout-scenario-plan

What are you some sort of tree hugging nut case! We need oil and we don't want to buy it from the Arabs any longer so shut up it will all be fine.

Tell THAT to families who lost loved ones and those towns & communities that will affected for years!

I agree we need to find our own natural resources but NOT at the expense of any human lives! I am sick of coal mining companies, oil refineries, etc. that would rather pay the government fines than correct the problems! The only one winning here is the government and what exactly is the govt doing with the money they have collected on these fines? That is BILLIONS of dollars!

Apparently we need to raise the fines tenfold to make this option less attractive!