Something Rotten is in Your New Roll Out Recycling Bin

Cedar Posts noted early this year that it seemed a little odd that the City of Charlotte would pay $10 million dollars now for roll out recycling bins that would save the city an estimated $10 million over ten years. Its called buying a pig in a poke by the way. 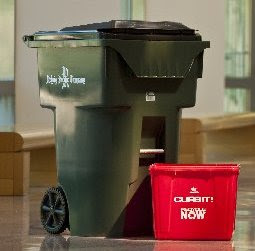 It doesn't take my more than 20 years in the financial services industry to see this was not a good deal. But considering that City Council members Dulin, Peacock and Cooksey's along with Mayor Foxx where really excited about "recycling" I should have smelled something rotten back then.

Well leave it to WBT's resident trouble maker Tara Sarvatius to "out" the folks in City/County GovCo and expose the whole scam. Turns out the reason these trash cans are so costly is because that are rigged up to spy on you.

That's right kids each recycling bin has an embedded a RF micro chip that identifies you and allows the City of Charlotte to track your garbage, recording the weight, frequency and correctness of your recycling duties. The long term intent is no doubt to tax you, penalize you and of course further erode your privacy. Of course if you are doing nothing wrong you have no reason to worry.

Let's just pray these micro chips work better that the micro chips in the water meters.
Posted by Cedar Posts at 6:32 AM

You can't make this stuff up, Charlotte is on the edge of becoming a neo-facist-commie-hole-in-the-ground.

All I can hope for is a recovery in the real estate market so I can sell my over taxed home, in my under reported crime over run neighborhood and go live on some island like Cedar plans to do.

Yeah Cedar I know who you are, and I know all about your connection to Jimmy Buffett via one Whit Slagsvol of Columbia.

And I for one am with ya!

Feet in the water and ass in the sand!

Ummm, I hope that ANON 11:48 is referring to our great leaders (puke) and NOT Cedar when he says "you suck"??

Not suprised at this at all, hell if Rodney, Curt, Harry, the City & County had their way we would have these same microchips w/added lenses in our houses!

These folks are IDIOTS! I cannot WAIT to leave "my hometown" because of all their BS!

And what's worse, PEOPLE sit around and complain but don't even BOTHER to get off their asses and VOTE! Much less get involved!

Sick of the masses sitting and pocketing OUR hard earned money! THEN finding ways to get more!

Election years come and go!!!
I'm not sure who is stupider (if that's a word), the politician or the voter!!!
Micro chips, street cars, escorts, what else can wr spend money on???
Maybe ignorant research or sexual harrasment investigations that won't result in anything but a waste of money!!!

Oh and the escort thing is just a joke... I'm not Mayor Foxx trying to start a new investigation!!!