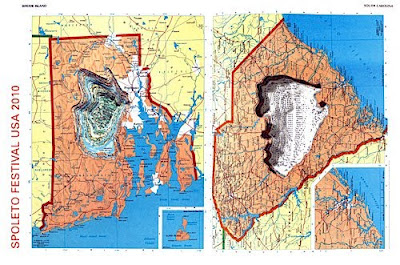 Political statement or maybe just making an odd point, American artist Maya Lin who was invited by the Spoleto Festival officials to make the poster, used the image of a coffee table sized Hammond World atlas to point out the connections between Rhode Island and South Carolina. The connection includes and border outlines of two unnamed African countries.

Best know for her acclaimed Vietnam Veterans Memorial in Washington, D.C., Lin is often credited with art that embraces the landscape.

The cut out shapes of 1700's Sierra Leone and Liberia make the statement complete. The cut out area of South Carolina also exposes the index, where the removed portion of Rhode Island exposes the world map in the opening pages of the atlas.

Few remember that Rhode Island was the only northern colony to use slaves both for labor and trade. At one time Rhode Island's ratio of slaves to whites was 8-1. But it is South Carolina that comes to mind when the word slave is spoken.
Posted by Cedar Posts at 9:16 AM