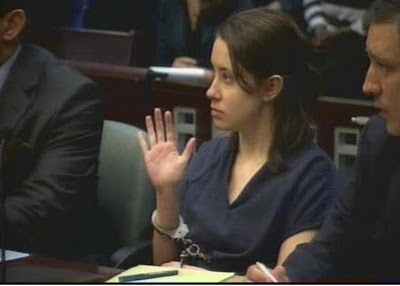 I doubt that many readers of Cedar Posts have an ounce of sympathy for Casey Anthony. But don't you think it's a real stretch to bring a capitol murder charge against the 24 year old mother?

First I don't think Casey Anthony can get a fail trial, and despite the horror of her actions I can't find a case for First Degree Murder. I fail to see anything other than involuntary manslaughter and child neglect. Being a party girl, a bad mother, even a slut in this country is not a capitol offense.

The Florida State attorneys office that originally stated it would not seek the death penalty reversed its earlier decision and that alone is cause for debate.

But the real issue is justice for Caylee, and there is not justice in putting her mother to death. In fact I think if the state of Florida presents a death penalty case against Cayce Anthony it will end in a full acquittal.
Posted by Cedar Posts at 6:23 PM

Cedar I have to agree with you but hate doing so. Casey is not fit to live in a world where parents care for their children. Maybe she didn't want to kill Caylee but the little girl is dead and Casey continues to claim she is not at fault. I think that alone calls for her to be put down.

Hold on one minute! This lady used Chloraform to "silence" that child many time so she could go out and party? While she had a mother and father that WANTED and were WILLING to take Caycee when SHE didn't want her... she DESERVES the death penalty!

This piece of crap went to high school with my nephews and was plainly a sicko then! ALL ABOUT HER *ALWAYS*! If litlle Caylee got more attention than Casey SHE actually got jealous of HER OWN CHILD!

Sorry Cedar, NO sympathy here! NONE

Cedar you are a tree hugging liberal who thinks everyone can reform.

No WAY with the Anthony Bitch, I say strap her ass to a gurney and and stick the needle to her. And good ridence.

Susan Smith, even the guy here in Charlotte who killed his twin daughters, and the woman who killed her what six kids in Texas they are need the death penalty.

Casey from all accouns didn't mean to kill her daughter, no I say NO.

I don't even think she'll get life in prison.

Casey's mother is a true nut case, some women just go that way after 40, waaacko! Her mother is a much to blame as Casey. The whole family is wacked out.

To Queen City, PLEEEEEZZZZE enough of the I'm a retired crack head! We get it already you used to be addicted to crack or meth or whatever, got arrested now you have recoverd. BFingD~!

Part of what Cedar is trying to convey is that there is nothing more damaging to the cause of justice than a grandstanding, head-tripping prosecutor. Nothing.

FLA officials clearly think they can make Anthony cry uncle and plea out by bringing a capital case -- at least I hope that is the motive. Even worse would be pandering to the Nancy Grace crowd.

Besides nothing would be more severe punishment for Anthony to lock her up and let her grow old and gray behind bars, far, far away from TV cameras and anyone's notice. Just her and her guilt -- year after year.

Hell, she'd probably love the attention and hoopla of 4-5 yrs. worth of legal circus it would take to execute her.

Who cares if YOU get it, those out there still on the streets DON'T get it....

TO: JAT....yep she loves ALL this attention! And hopefully the prosecuters will get her to plea so taxpayers can stop paying her HUGE fees!

Queen City - It is a big f-ing deal - you have conquered something that takes real guts, will power and strength. I don't always agree with your postings, but I do admire your tenacious attitude.

Yea yea the kid is dead, too bad since there are thousands of good parents would be love to have kids and can't.

But this is a deeper issue, we have a country that has gone to hell. Girls gone wild is cool and when you can't get out every night your like sucks and you use the internet to figure out how to keep you kid in the trunk without her making a lot of noise.

You can bet there are thousands of Caycee Anthony's out there what are we going to do kill them all?

You are right about that Cedar....WAY too many out there. I only wish we could save them all (the kids and the parents) BEFORE tragedy strikes!

Nope can't kill them all, most will end up in jail, institutions or die from their own actions.

But bottom line Casey's Mom had tried several times to get Caylee, but Casey played a lot of games by hiding Caylee, etc. Casey knew what she was doing when she did all that internet research on chloraform, decomposing bodies, etc. I doubt she will get a fair trial because of all the media....

BUT I also bet there are not too many people (esp women) who think she shouldn't get the death penalty.

Yes Cedar... Maybe they should be!!! Any child killers (not accidents) and child rapist should be executed... That would free up some prison space!!!

Florida
Code Section 921.141(6)
Mitigating circumstances shall be the following:
(a) The defendant has no significant history of prior criminal activity.
(b) The capital felony was committed while the defendant was under the influence of extreme mental
or emotional disturbance.
(e) The defendant acted under extreme duress or under the substantial domination of another person.
(f) The capacity of the defendant to appreciate the criminality of his or her conduct or to conform his or her conduct to the requirements of law was substantially impaired.
(h) The existence of any other factors in the defendant’s background that would mitigate against imposition
of the death penalty.

Well, gotta say that in Casey's case (a) & (b) of the above post does knock out the death penalty...
(a) I don't think she had a past criminal history; (b) she had to nuts to do what she did. And it is apparent she did/does have mental and emotional issues. It seems to the untrained person she may have a borderline personality disorder...

ref past hx Casey Anthony does have a past criminal hx - she forged checks from her Grandmother - and from her friend who's car she was borrowing prior to being charged with her daughters death. She was convicted so there for she does have a previous criminal history