Jenny Sanford is in the news again, this time telling Dr. Phil she saw her ex husband Mark as "being lost".

Cedar Posts has the box in front of the Governor's at the Springdale Race Course in Camden, SC home of the Carolina Cup. Over the years I've seen the Sanford's together and they always looked like the odd couple. Some people just look like they belong together but, out in public around Charleston they always looked out of touch with each other. The funny thing is, the more Jenny talks the less I like her.

Boston hockey fans took one on the nose, after being up 3 games in the playoffs and up 3 goals to Philly in game seven they go home. Fail - Bruins. Hockey is an odd sport with few fans down on tobacco road. But there are reasons to like hockey. Reasons like "ice girls" in this case Chicago Black Hawks ice girls. 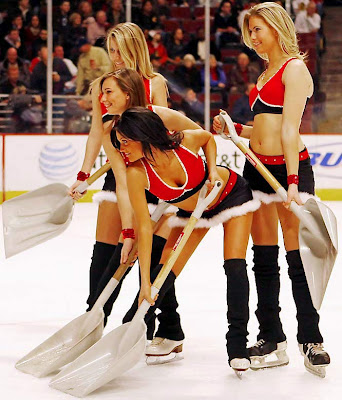 If these girls don't make you want to watch at least one playoff game you aren't breathing.

But sadly in the Carolina's I can only think of one girl who really loves hockey, Charleston traffic reporter, radio personality and local hottie Heather Daniels. Heather meets all the criteria for "rabid hockey fan" just check out her tweets, @the_ohso_lovely.

Communities in Schools is holding the second annual "Yacht Affair" and Cedar Posts is in the middle of it all.

This event combines Yachts, Charleston Area Chefs and a good cause for a evening of dockside elegance. Communities in Schools is a mentoring, dropout prevention program that has had great success over the years. In Charleston CIS helped more than 500 student in the 2009 school year excel and succeed in High School. Proceeds from Sunday nights event go towards funding programs throughout the Charleston area.

Some of the chef's and restaurants in this year's event include:

Besides great food and wine, this year's event includes live entertainment, silent auctions and of course the yachts, the event is a who's who of Charleston. The best part is that tickets are still available. Call Communities in Schools at 843-740-6793.
Posted by Cedar Posts at 3:16 AM