So our US Airways fight 2056 out of Boston is hurdling towards Charlotte, running the Ivane 3 arrival, basically straight in from the north, which is good, but doing "S" turns to comply with traffic separation which is bad.

Finally we get to the Ivane fix with radar vectors to intercept the localizer and then swing right to line up on 18R.

Over the threshold he's hot, and I tell Mrs Cedar "he's way too fast".

Looking out the window we are burning up runway at an amazing pace. The A321 needs 5000+ feet fully loaded and we use up 2500 before we have main gear touch down. I'm pretty sure we are well past the grease spot and nearly 2/3rds the way down the runway.

Touch down is perfect, just a little power and we grease the landing.

But guess what?, we are out of runway! Brakes and thrusters are hit so hard that the rivets start rattling and the overhead bins pop open as everyone is slammed forward into their seat belts. 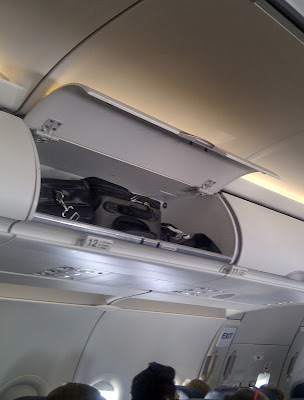 Got to love these former Navy pilots and their carrier landings!
Mrs. Cedar looks out the window as the plane veers left taking the last highspeed taxiway, where she notes that the end of the runway is less 100 yards away. We are still moving at V1 as we barely make the exit still trying to bleed off some speed.

At this point they should have cued the theme from Taxi, yes the melancholy "Angela" from jazz great Bob James.

Perfect for the long ride to the gate while the guy in the right seat reflects on his landing.

Mrs. Cedar looks to me and asks "how did you know?"

Let's see your husband is a pilot with about a 1000 landings and ten times that flying as a commercial airline passenger.

I add the wisdom of my first flight instructor Ben: "A great landing is meaningless if you run out of asphalt in the process"

Drifting down the runway to squeak the landing trying to impress the grey haired guy in the left seat is a rookie mistake.
The trouble with being a pilot and backseat flier is you know exactly what is normal and what is not. I expect that 99 percent of those who die in plane crashes never knew what happened. I will be in the 1 percent who knew.
Posted by Cedar Posts at 3:19 AM

Hey Cedar... I know this is "off subject" but what do you know about that CMPD officer whose hearing is tomorrow? He's been suspended for a year? Saw something on the news about it...

Cedar can we also get update on current airport police stuff going on? Will they be cmpd officers or not?

And while your on it, why is Starcelebrity Buzz using a photo Id of Kristin Kreuk?

Cedar at least acknowledge why the radio silence on the airport issue. No problem on no comment but at least say something; you must know the slightest detail

I'm pretty much out of the loop on the CMPD vs CDIA Police issue.

There is a federal case in the wings (no pun intended) City Attorneys had moved for a dismissal but a federal magistrate ruled the case could move forward.

But I'll keep my eyes and ears open.

What are you talking about? I thought CMPD was officially out there and the CDIA guys all got demoted to security guards?

Let me offer the inside. The City is losing. Mediation is ongoing but the airport lambs may insist on a trial. So far Airport Officer 4 City 0.

I have mentioned before that the Airport officers have been through BLET, some even went through the CMPD academy. CMPD hired officers, from other NC agencies, and they just went through a two to three week lateral transfer academy and were sworn in as CMPD officers. Airport officers should get the same treatment.