"Hands - Up, Don't - Shoot" is a myth perpetuated by mainstream media. Mike Brown did not have his hands up. 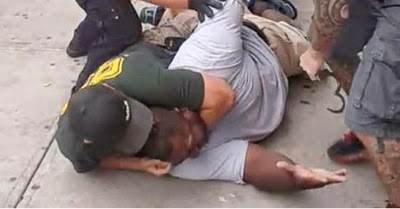 The myth continues with Eric Garner's "chokehold death" again perpetuated by MSM. A recent CNN piece on the Eric Garner grand jury decision, starts by saying "Eric Garner initially has his hands up" which is utter bull shit, unless you count wild gesturing as holding your hands up.

Garner died as police tried to arrest him, but his death was not caused by the chokehold, but rather his own weight, being forced to lie face down and another officer lying on top of him.

The officer who applied the chokehold released Eric Garner from the chokehold after less than 20 seconds, once he was down and rolled on to his stomach. But the other officers failed understand that Garner's diaphram was no match for his 400 pounds and the added weight of one or more officers who where on top of him.

And then there is the myth of the war on young black Americans and that a racist white government is condoning the killing of blacks by white police officers.

"Michael Brown’s death on August 9 was a nationwide wake-up call to the death-by-cop of young minority men at the hands of law enforcement." Claims a New York Times sub headline.

But according to FBI data stretching from 1999 to 2011, African Americans have comprised only 26 percent of all police-shooting victims.

Since Brown’s death, at least 14 other teenagers have been killed by law enforcement in a variety of circumstances. But only six of them were African Americans.

This is the photo used over and over again to illustrate the death of Eric Garner, but this chokehold didn't kill the man.