You Want An Indictment? 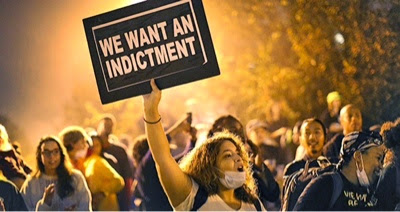 How about you indict black culture, hateful rap lyrics that promote killing cops, fathers who abandon their sons and brag about how many baby's mommas they have to support.

Why don't you indict a nation that accepts African Americans short comings and gives them welfare over justice and equality.

Indict Sharpton and Jackson who scream for equality while they drive their Mercedes and fly in their private jets to create more hate.

Indict a mindset that says cops deserve no respect and that acting up and mouthing off will keep you from being arrested (has that ever worked).

Indict a lifestyle of lying, thieving and posting Facebook photos of your mugshots like they are some sort of badge of honor.

And finally indict the main stream media who play fast and loose with the facts, and fail to point out that the Garner grand jury was randomly selected from the citizens of the State of New York, and that no doubt each of the 23 members of the grand jury had seen the video of Eric Garner's arrest and death, and still knowing that it only took a simple majority to indict the NYPD Officer saw that facts did not warrant an indictment.

and what about the poor man that was shot and burned in the car during the riots in Ferguson?

No covered funeral expenses for him, no Sharpton, Crump, Holder or Obama speaking up for him or parading his mother around the country to speak out against rioting violence. His family is scrounging to raise money for his funeral. So sad, he was a real victim of Ferguson. All of the race baiters might as well have stomped on his head and walked over him. They should also be held partially responsible in his death for inciting the riots. No media hype for him because He didn't fit the desired narrative.

Maybe if you were trapped in a socio-economic prison established by the racist white regime you would realize that you have no way out and no way up!! The white man wants us down and keeps us down by not allowing us an education, housing and other opportunities that all white people get!!

6:15 I hope you're being sarcastic

To 6:15...The only thing keeping you back is you. Education is free and readily available. Get a job, STFU, and join the rest of us in the middle class. Enough said.

This video is an example of what is wrong with police officers today and what society thinks police should be. The other officers there should have went hands on too and not put it on the one officer to take the enormous man down. Second, if the Officer would have repeatedly struck Garner when he pushed them away twice the police would have been fired immediately. Lastly, even if a taser was immediately available the chances of Garner having an adverse reaction would have been elevated due to his history of heart problems, high blood pressure, and obesity. Tasers can kill people as we have seen.

Garner pulled his arms away and pushed back officers. That was when the Officer basically tried to take him down while the others watched.

So, I think the fact that officers are not trained for, told to avoid, and just plain scared of physically subduing criminals. This leaves one lone officer willing to jump on the back of a man three times his size.

Also, did you see that Garner was still trying to get up all the way through the incident? He finally stopped attempting to get up when he was handcuffed.

The grand jury watched the video and didn't indict and there are protests? I guess they should have taken it to the magistrate like we did here...get the arrest and then shop the case to the grand jury until they accept it.

I think all officers should protest by calling in sick on Sundays for the Panthers games, July 4th, speed street, CIAA, and let the citizens who are oppressed have the chance to have a good time without police interference.

Oh geez, Columbia Law students that are too upset about the injustice of the mike Brown verdict to take exams can be granted an extension. Has the whole world lost their minds?

The institute watches closely, as other posters point out. The current system is not too friendly to your viewpoint on this articulated matter, but you must change your laws, or accept them as they have been passed. There are only these two options.

Whites have committed some of the most atrocious crimes in the history of this country, but would have the world believe its the BLACK PEOPLES fault they are so sadistic .....they hate what they fear, and they fear us.....