File this under it's not really news.
Turns out South Carolina state senator Katrina Shealy is as bad at taking jokes as she is at coordinating her outfits. 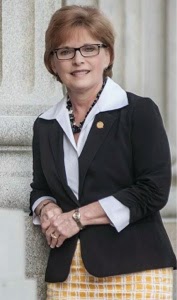 COLUMBIA, S.C. (AP) - South Carolina's only female senator says a Republican colleague made upsetting, sexist remarks to her at a dinner that she hopes he never says again.
Republican Sen. Katrina Shealy of Lexington said Friday that Sen. Tom Corbin of Travelers Rest referred to women as a "lesser cut of meat" while they dined with others Tuesday. She said he was referring to rib meat, after saying God made Eve from Adam's rib.
She says Corbin thinks such comments are an ongoing joke between them. The two sat beside each other in Senate chambers for the last two years.
But Shealy says she's told him repeatedly it's not funny. She said Tuesday's comments went too far and she made it clear she deserves respect.
Cedar's Take: Sounds like Senator Shealy missed her happy pill. My comment posted to the local news coverage "I think she should lighten up and stop shopping at Good Will!" she didn't think was funny either.
Shelly's rebuttal:
In response to all of these comments those who support me and those who think I am whining and even the guy who said I should stop shopping at Good Will?  The real story is that Senator Corbin has repeatedly made these comments to me in both private and public and I have repeatedly asked him politely to stop - telling him it is inappropriate.  The fine Senator went too far this week by making repeated comments in front of people who did not mind going to the media.  Make no mistake- this little girl can take up for herself but the disdain and disrespect for every other woman including your wife, your mother and Your daughter should appall you.  I will defend myself and will set the best example I can for those young women who want to follow in my footsteps.  No woman should accept those type comments in public or in private.
Cedar Continued: so the guy is a mindless toad, who cares? Suck it up cupcake! At least he's keeping it PG, you don't want to know what the rest of the senate thinks in private.
Cedar Update:
Pulled these excerpts from Fits News:
"I see it only took me two years to get you wearing shoes," Corbin told Shealy, who was elected in 2012 as a petition candidate.
Wait … what?
By way of explanation, lawmakers and legislative staffers have previously told FITS about statements made by Corbin – statements reflecting his belief that women do not belong in the S.C. General Assembly and should instead be "at home baking cookies" or "barefoot and pregnant."
"He makes comments like that all the time to everybody – including Senator Shealy," one Senate staffer told FITS.
Corbin's latest comments took his sexism to a whole new level, though.
At one point in the conversation – which quickly escalated into a confrontation – Shealy is said to have angrily asked Corbin where he "got off" attacking women.
His response – overheard by numerous lobbyists and fellow lawmakers – was one for the ages.
"Well, you know God created man first," Corbin said, reportedly smirking at Shealy. "Then he took the rib out of man to make woman. And you know, a rib is a lesser cut of meat."

I don't care about this except to say his rights end where hers begin. So he can think whatever he wants, that's his right, but once he says it and is made clear it is unappreciated, his right ends. The whole "lesser meat" thing is just passive aggressive anyway.

Cedar, you know I love you, but you might just have your head up your butt. lol.

Maybe the senator needs to focus on more pressing issues, like ISIS! Otherwise she should revert back to being a homemaker and leave the big decisions to the men.

Yes, a they deal with Isis in the South Carolina state senate on a regular basis. Maybe you need to move to Traverler's Rest with the good Senator Corbin and when your IQ exceeds your inseam we can finish this conversation?

I am thinking Cedar Post has to pull his wife beater shirt out to talk. Surely his Sir name is Clampett....no that can't be - Jed had a daughter. Ellie Mae, I m pretty sure he would have beat the BeeJesus out of any Bafoon that called that girl a lesser piece of anything! Any people who talk about how people dress really - I'd love to see this Mr GQ...he just has a picture of a cedar stump for a picture and 1960 pics of girls in bathing suits?? Mr. fashionista!!!

Living in Columbia and seeing Ms. Shealy about town often I can tell you she's a pig.

Yes, I wait tables for a living.

And to support my kids, I work a split shift at a popular lunch and dinner spot in Columbia.

The woman is about as poorly suited for office as anyone I know. She totally resents the attention I get from the men she comes in with.

She is just as rude to me and my coworkers as she claims the Corbin guy is.

So you're probably left-wing,
Liberal feminist nut bag, but I'll speak in terms easy enough for you to understand... The radical Muslims are already here. You need to wake up and protest yourself... Yes, even in SC

Hey 7:08 California Dreaming I've seen her there never knew who she was, sorry she stiffed you.

Double standard must be Corbin's girlfriend because I know for a fact that Shealy is probably the best tipper in town - better than any of the men. she goes to Blue Marlin all the time where I work and I always want her table. you are being paid to write that crap. As for California Dreaming...I doubt she would go to that dump

With the amount of crying she's done over this you'd think she was a democrat.

I'd suggest she grow a pair but looks like she already did.