Robin Meade's workout routine has paid off nicely, the new sleeker Robin has firmed up and toned up and in the process of dropping a couple of dress sizes she has also become tone deaf.
This morning while posed in front of a wide screen video of the Confederate Battle Flag flying over the South Carolina statehouse circa 1990, Meade starts yapping about how "pressure continues to mount to remove the southern symbol of hate from atop the South Carolina State Capitol". 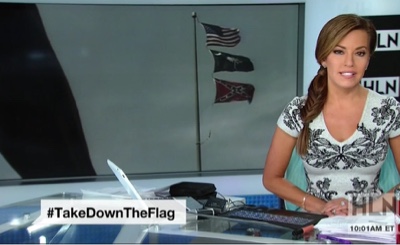 The #TakeDownTheFlag hash tag is displayed on the screen adding more nonsensical hype to the image of the 3 flags from decades ago.
Since Meade's 30 minute show Morning Express is on a loop, the same lie is repeated over and over every 30 minutes all morning long.
We live in a time were the news media is no longer reporting facts of who, what, where, why but rather "look as this shit", you should be upset, or appalled or "look at this sad story" or this tearjerker engagement.
Come on Robin just the facts ma'am just the facts!
Cedar's Take: Anyone watching Nikki Haley announce her demand to remove the Battle Flag from the grounds of the South Carolina statehouse, notice two things. Frustrating she looks really good in her $2,000.00 St John's suits and second she looked really uncomfortable when her announcement was met with rancorous applause.
Haley understands two things, regardless of what side of the flag debate you are on, the fact that it took the murder of 9 innocent lives in a church makes the remove of the confederate flag from the statehouse grounds nothing to cheer about. And that the flag did not cause this act of violence nor will the removal of this flag prevent this sort of violence in the future.
Meade on the other hand remains totaly clueless.
Posted by Cedar Posts at 3:36 PM

I agree Robin has always been nice to look at, but a majority of the media coverage these days is a joke: Profit driven, sensationalized, and missing the point.

I had family members fight under the Confederate flag, but if it is offensive to enough people, take it down I say. It is too divisive, and hopefully removing it will remove an obstacle to understanding the racial issues in this country.

Cedar, you are spot on: Just the facts, the death of 9 to kill a flag is nothing to get excited about, and the removal of the flag is symbolic.

Every race, white, black and so on needs to get real and honest with themselves and others...until that happens I don't see race relations progressing. When you start identifying as an individual and not relying on your race or racial history to self identify, then progress begins because you are free from the mob mentality. You can think for yourself and others can engage you as a true individual.

Removing that flag, while I am in support of it will not advance racial harmony any more than electing a Black president brought the nation together. It creates group cohesion among already like minded people for around a day, and then it is off to the next "look at this shit story" (as Cedar put it).

I think we can all agree the shooting was racially motivated and the kid was a nut job who probably had some guidance from someone or something to begin to consider such an act. But I seriously doubt the flag motivated him.

This is an indicator of the huge mental health problem we have in our society that goes unaddressed. This includes marginalization of young people of all colors, coupled with a lack of general economic opportunities in society (aka the economy sucks). This doesn't justify this guy's actions, lock him up and execute him if possible.

But we need to take a look at the factors that isolate these people and then compel them to become violent. And the flag just isn't a factor in this. Still, take it down, I just hope the greater issue mental health issue doesn't get ignored after it is removed.

Getting rid of the flag isn't "success," it is simply symbolic. It is necessary, I think, but should not be used as evidence of effective problem solving.