Few people notice that the flag of the Confederate States of America flies atop the North Carolina State Capitol three times a year.
Flag Day is one of three days when flags of the Confederacy fly from the top of the Capitol (Robert E. Lee Day and Confederate Memorial Day being the other two). 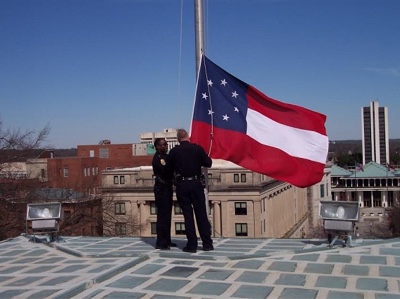 Initially established by proclamation in 1987 by Governor James G. Martin, Confederate Flag Day has been continually observed since 1988 at the State Capitol in same House of Representatives chamber where on May 20, 1861, North Carolina voted unanimously to leave the Federal union and associate with the Confederacy.
The flag chosen is not the St. Andrews Cross embraced by white supremists and neo nazis, rather the stars and bars or as known by some as the seven sisters representing the first seven states to secede from the union.
The calls for removal of the Confederate Battle Flag are well understood, but the rush to remove all vestiges of the Confederacy are misguided. The end of the civil war began a period reconstruction and reconciliation. Monuments were erected memorials made on both sides, a divided nation set aside their egos.
No trials were held, not one CSA general was executed, the war was simply over.  In fact while Jefferson Davis was held as prisoner he was never charged and released.
There are competing memorials to both sides across the nation. More Union than Confederate up North with the reverse being true in the South.
It would be wrong to remove just the Confederate memorials and pay homage to Union Generals like Sherman who committed acts that today would find him on trial for war crimes.
Posted by Cedar Posts at 2:36 PM