Charlotte hails the Chief – and I don’t know why 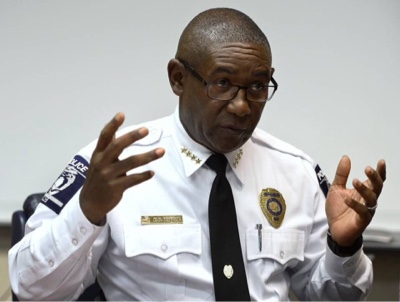 Rodney Monroe has always had a hold on Charlotte. I’ve never understood why.

The CMPD chief recently announced his retirement. The city and media showered him with praise for reducing crime to levels not seen in decades.

“Monroe to retire after sharp drop in crime,” declared the Observer headline. Another account, offering Seven Fascinating Facts About Rodney Monroe, glowed, “Under his leadership, Charlotte ... saw a historic low in homicides.” Most media parroted the paper.

The fact is homicides and violent crime dropped sharply and historically nationwide during Monroe’s years here, according to the FBI; to levels not seen across the U.S. since the 1970s. A fact more fascinating to the prevailing sensibility might have been, “Crime plummeted practically everywhere during the years Rodney Monroe happened to be Charlotte’s police chief,” but reflexive adoration won out.

There’s never been much challenging of Rodney Monroe by his bosses at Charlotte GuvCo. I’ve never known why.

His tenure has included several officer-involved shootings and questions of excessive force; the sexual assault of at least five women by an officer the chief admitted should have never been hired; the misdeeds of a detective whose lost notes and fabrications took the death penalty off the table for the killer of two CMPD officers; and many matters of openness and transparency, among other controversies. Through it all, Monroe has been constantly kissed by four mayors, the City Council, one full-time and one interim city manager.

Only current manager Ron Carlee seems to have challenged the chief, an offense for which Carlee may lose his job.

Last year, Monroe promoted himself from a two-star chief to a four-star chief. I’ve never heard why.

Over the weekend I emailed three CMPD spokespeople, asking who authorized the additional stars on the chief’s collar and what they mean. It’s now Tuesday afternoon. I’ll let you know if I hear something.

Shortly after he became chief in 2008, Rodney Monroe came to my radio studio. We talked about gangs and staffing and cops on the street. Finally, I asked, “If I’m at an ATM and it spits out thousands of dollars, do I get to keep the money?”

“But I didn’t do anything wrong?”

“At Virginia Commonwealth University they’re saying you’re keeping a college degree you got (but didn’t earn), because you didn’t do anything wrong – but the college did do something wrong. They gave out a degree ... like a busted ATM. Why don’t I get to keep the money at the ATM but you get to keep the degree?”

“Keith, I’m not going to continue to debate this issue.”

Seconds later, he was gone. Though invited back several times, he hasn’t spoken with me since.

About this, I do know why.

Cedar's take notes the self promotion from two stars to five, which is totally Rodney, his ego is just mind bending. The reason for the two stars of course is tradition. Look around the Carolina's and you'll find that with the exception of Raleigh the chief of police has two stars.

There's a reason for this

The insignia of the Chief of Police was two gold stars until 2014, when Chief Rodney D. Monroe upgraded it to four stars.[16]

Read more here: http://www.charlotteobserver.com/opinion/op-ed/article22931100.html#storylink=cpy
Posted by Cedar Posts at 4:46 AM

Romo! Take your University of Pheonix degree and GTFO!! McDonalds is always hiring..

At least some Charlotte journalists still dig for the truth and don't lazily take things at face value. Bravo, Keith Larson, for trying to keep him honest. Bravo, CP for giving his final story on King Rodney an outlet. As usual, guilty people run from the truth.

Chief Rod will have a federal job or a great consulting gig in less than 2 months. Expect an increase in the crime numbers if/when the hidden truths of the real numbers are exposed.

This site was created by a COWARD to get other COWARDS all fired up!!! SPINELESS COWARDS!!! Some Police Officers are the meanest most hateful people I have ever encountered. They will smile in your face and shake your hand, then say things like that"N WORD" does not deserve it, he only got it because he or she is black!!!

Rumors are cheap..... this person having sex with that person to get where they are. It appears this only matters to them when it's someone they don't like, but if it's them doing the side banging or one of their friends doing the side banging while married to another officer or married period, it's all good!!! Hypocrites!!!

All of the folks HATING on Chief Monroe either were not here for Chief Stephens or simply want to turn a blind eye to how SHITTY the department had become under Chief SPINELESS. I guess folks forgot that he couldn't even look people in the eye when he spoke to them.

June 4 10:28.....
You are kidding right? You really think the department is BETTER now? All the corruption, the state of the academy, the hiring of officers with criminal records. ..do I need to add more? There were things that were wrong with Stephens but they were not even close to this mess. You either got passed up a lot for positions or something and have a little grudge. To say it's better now is laughable.

Fanboy of Chief Monroe? I've been on the job when both Stephens and Monroe were leaders of the PD. We were much better under Stephens. Race aside, Stephens was honest. Debate that.

10:28.....sounds like Bellamy posting again. #1 fanboy. Wipe the ketchup & mustard off the white shirt and have it dry cleaned and pressed once in awhile.... People would respect u more....... Naw, but you would look more presentable.

What happened to the Chief giving everyones personnel info to the Univ of Chicago for some White House project?? He changed his mind in just a few hours? What other crazy idea is this man gonna implement before he leaves?

I worked for three different chiefs with CMPD. King Rodney is the worst chief by far. Yes some things were messed up with the other chiefs. But King Rodney is the most corrupt. He can take the degree he doesn't have and shove it up his ass.

The only reason why people including the FBI thinks crime is lower in Charlotte because the bean counters are concealing the true numbers. Basically not reporting correctly to the FBI.

I have worked under 5 Chiefs while at CPD/CMPD and the ROMO wins the "Worst Chief Award" hands down. It will take at least a decade for the the department to recover from his corruption and dishonesty. I just hope nothing bad happens during the trial next month, but seeing ROMO run out the door weeks before doesn't instill confidence.

@8:58 It will take longer than 10 years if one of his cronies ends up in the big chair!

Well you might as well get ready for your 10 years. If I were a betting man I'd say D/C Putney will get the job. The handwriting is on the wall.