Let's face it whatever you want to call it, "Stars and Bars" "Rebel Flag" or "Stupid Redneck Banner" it sure has created a whole lot more stink than the Nazi flag ever did.
T
here's a lot of crazy talk lately about the civil war, the confederate flag, the heritage vs hate argument  and now there nutbags out there saying that the veterans of the Confederate Army are not United States veterans.
We've heard the same old angry Yankee comments about those who fought for the South during the Civil War: that they were all traitors, racistists, bigots, white supremistis, terrorists, segregationists, treasonous bastards. Always followed by "you lost the war get over it".

The latest argument is that even if the flag only represents heritage it is a repugnant heritage that sound be erased and furthermore that anyone who stands with or ever stood with the confederate flag is a traitor and a racist and certainly not a United States Veteran.

Regardless to the fact that congress recognized those who fought for the south as veterans years ago.

The fact is many of the confederate civil war veterans later went on to fight under the Stars and Stripes during the Western Indian wars.

And after that their sons carried on in the Spaish American War proudly carrying the confederate battle flags.
The St. Andrews Cross was indeed the flag of choice for CSA troops. Dozens of variations, but still the same basic elements blue St Andrews Cross on a blood red background with a number of white stars.
The argument that it wasn't the "Official" flag of the Confederacy might be true but it doesn't hold up on the battle field.
While the Army of Northern Virginia made it notable, thanks to their many victorious battles, the use was indeed wide spread, but not just with the South during the Civil War and soon thereafter.

During World War II numerous air and ground units adopted the "battle flag" as it adorned tanks rolled and B-17's that flew across the battle fields of Europe and the Pacific, in fact it was pretty much wherever southern boys went into battle. 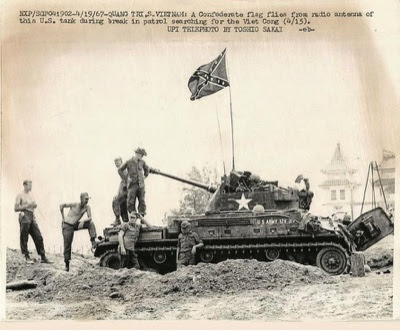 A Confederate battle flag was raised on Shuri Castle at Okinawa in May, 1945. The man who carried the flag was Capt. Julian Dusenbury of Clausen, SC. 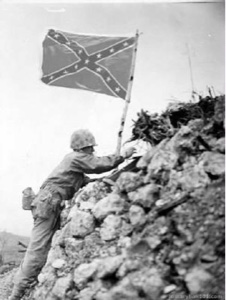 Capt. Dusenbury commanded A Company, 1st Battalion., 5th Marines, of the 1st Marine Division. He also fought at Peleliu, where he was awarded the silver star and purple heart.

The day before the flag raising on Okinawa, Capt. Dusenbury's company had been cut off from the battalion and was surrounded. Capt. Dusenbury crawled through mud, over bodies, and past Japanese sentries nine times to drag back boxes of ammunition to his men.

He was later wounded, but his Marines found his Confederate Battle Flag in his helmet and not having anything else to fly over Shuri, they flew the star and bars. The flag was later presented to Lt. Gen. Simon Bolivar Buckner, Jr., son of the Union Civil War general. 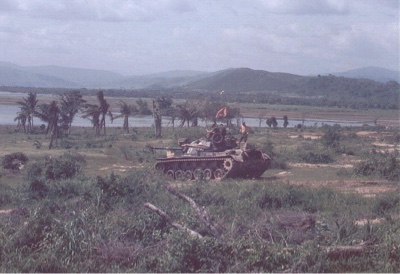 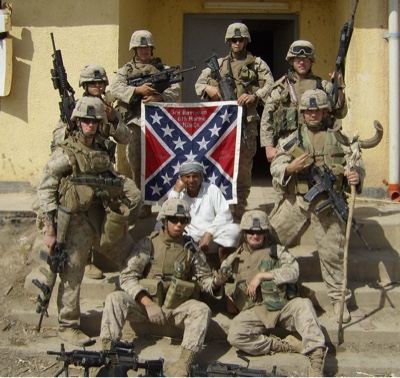 Korea, Vietnam Nam and even Desert Storm, the confederate battle flag has been raised not as a sign of hate but of  regional identity. 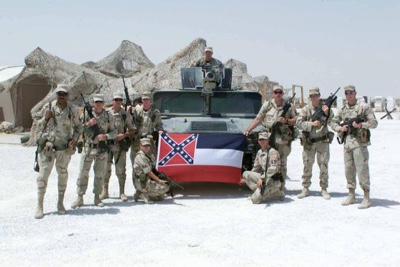 American servicemen throughout the years have gone to war carrying the rebel flag along with many other flags or symbols. Like Capt. Dusenbury, many carried it simply because they were born and raised in the South. 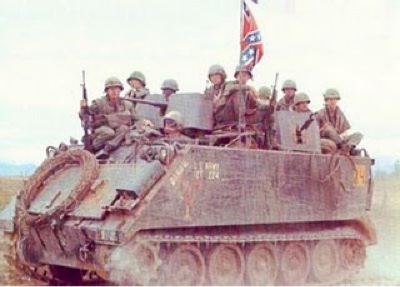 Southerners will tell you the flag was hijacked by the White Supremacist movement and the Ku Klux Klan. They will also tell you that it isn't a symbol of hate and that stands for racism, and slavery and so on. Frankly as long as the anarchists keep yelling about hate a lot of people will indeed only associate it with that and so be it, since that is indeed may be their experience.
But for the men who carried it into battle it is not a banner of hate but a symbol of the South, of defiant determination and lasting resolve, steadfast courage, honor, commitment and above all Southern determination.

And to claim that anyone who honors the Confederate flag is a traitor, is being nothing more than a narrow minded bigot.

Police say the Pringle was seen running from the area where shots were reported as being fired. When he was chased by a North Charleston Police Officer he turned and pointed a gun and the Officer fired his weapon.
wood privacy fence cost